Grace Warnecke of New York City and Vineyard Haven is as familiar as anyone on the Island with the people and the culture of Ukraine. She spent four years in the country now under siege while running the organization she founded in 1999 called Women’s Economic Empowerment. While living in Kyiv, Warnecke got to know many of the local people, including a number of artists and gallery owners, and she brought 32 paintings back to the U.S. with her. A substantial part of that collection will be on display this month at the Martha’s Vineyard Playhouse, with proceeds from sales of the work going toward Ukrainian relief efforts.

The selection will range from work by some of Ukraine’s foremost artists to emerging or lesser-known painters. Warnecke, who has been an art collector for many years, amassed the collection during frequent visits to galleries and artists’ studios in Kyiv.

“In the beginning I had no friends. I knew nobody,” she says. “I started going to art galleries.” Soon enough, Warnecke had become close to many artists and gallery owners. She was very impressed with the work by local artists, which was often being offered for a fraction of its actual value since the subjects didn’t fit within the dictates that were imposed by the Communist government during the Soviet era. Artists were only allowed to sell paintings of a propaganda nature.

That didn’t stop Ukrainian artists from creating work of all kinds and, once the Soviet Union dissolved, there was a wealth of artwork available that could be had at bargain prices. Warnecke remarks that she didn’t have a lot of money at the time, but she was able to bring a total of 32 paintings back home when she returned to the U.S. in 2003.

In 2004, Warnecke showed the paintings at the Ukrainian Institute in New York City. A number of pieces sold, and the rest went up on the walls of the collector’s New York apartment and Vineyard home. Now Warnecke has decided to part with them in order to help a cause near and dear to her heart.

“When the war started, I wanted to do something for Ukraine,” says Warnecke. “I have a lot of friends there. What they are going through is unbelievably horrible. When, and if, and however this war ends, they are going to have to rebuild their country.”

Warnecke has spent a lifetime immersed in politics. Her father, George Kennan, considered one of the most influential diplomats of the 20th century, served as ambassador to the Soviet Union under President Truman and ambassador to Yugoslavia during the Kennedy administration. He played an instrumental role in the formation of U.S. cold war policies of Soviet containment.

Daughter Grace attended a Soviet school during World War II, and went on to forge a multifaceted career, which included the founding of various humanitarian and cultural organizations. She has worked variously as an NGO leader, foundation executive, small business development expert, writer, editor, and photographer. Warnecke traveled overseas twice to serve as an international election monitor, in Ukraine and Azerbaijan. She was associate producer of a PBS documentary, “The First Fifty Years: Reflections on U.S.-Soviet Relations.”

In her role as a consultant to NGOs, Warnecke recalls a private one-on-one meeting with President Putin. “He had the coldest eyes I’ve ever seen,” she says. In 2018 the University of Pittsburgh Press published her memoir, “Daughter of the Cold War.”

Proceeds from the sale will go to three organizations that have been well-vetted by Warnecke — Doctors Without Borders, the International Rescue Committee, and a Ukrainian-based organization.

Warnecke will be on hand for the opening reception. She hopes that the collection she has lovingly amassed and treasured for many years will help make a difference in some small way. “I am happy to donate a significant portion of my collection to aid the suffering and courageous people of Ukraine,” she says.

“Art for Ukraine — Paintings by Ukrainian Artists from the Collection of Grace Kennan Warnecke,” a benefit for Ukrainian relief efforts. June 2 to 18. Outdoor reception Saturday, June 4, from 5 to 6:30 pm. Playhouse Art Space Gallery is open on Tuesday, Thursday, and Saturday from 1 to 4 pm, or by chance or by appointment, 24 Church St., Vineyard Haven. 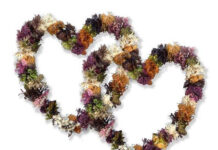 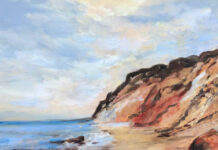