Ralph Lowell Jr. died peacefully of COVID at the Martha’s Vineyard Hospital on May 24, 2022, at the age of 99. 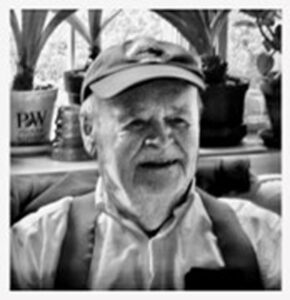 Born in Dedham on March 5, 1923, to Charlotte (Loring) Lowell and Ralph Lowell, Ralph Lowell Jr. arrived during a snowstorm, and was delivered at home by a doctor who traveled by horse-drawn sleigh. Ralph attended the Dedham Country Day School (1935), Noble & Greenough School (1941), and Harvard College (1945). He served in World War II as a U.S. Navy line officer on the destroyer U.S.S. Earle, conducting convoy escort missions in the North Atlantic. Ralph married Joan MacDuffie of Chestnut Hill on July 15, 1948. They lived in his grandfather Lindsley Loring’s house in Westwood for 22 years while Ralph was vice president of Merrill Lynch, Pierce, Fenner, and Smith in Boston. Ralph also was director of the Family Counseling and Guidance Center of Boston, trustee and president of the Boston Floating Hospital for Children, and trustee of the Dedham Country Day School, the Dedham Institute for Savings, the Faulkner Hospital, New England Medical Center, and the Massachusetts Society for the Prevention of Cruelty to Children. He was a member of the Harvard Club of Boston, the Massachusetts Charitable Society, the Boston Episcopal Charitable Society, and the Nahant Historical Society.

When not working, Ralph immersed himself in his favorite pastimes, including gardening, lobstering, and “doing projects.” Upon his retirement in 1979, he and Joan moved to Edgartown. They loved island life, both Martha’s Vineyard and the Virgin Islands — St. John, St. Croix, and Tortola— where they would vacation each winter to celebrate their birthdays. Their island jaunts were among the happiest times of their lives together.

As a boy, Ralph spent summers at his family home in Nahant on Boston Harbor, where he learned lobster fishing at the early age of 8. A natural businessman, by age 13 he had a small yet successful lobstering business, hiring his best friend Pat Grant as sternman to help haul his hand-built wooden traps for 10 cents a day. Ralph continued lobstering as a hobby each summer until he turned 80. He held the oldest lobstering license in the state of Massachusetts until he reluctantly retired it just a few years ago. He was respectfully known as “the Old-Timer” by local fishermen. Ralph was certain that it was his years lobstering in the salt air that led to his 99-year longevity. His ashes will be spread at sea.
Ralph was a supportive, generous, and much-loved husband and father. He is survived by his wife of 74 years, Joan MacDuffie Lowell;, and his three children and their spouses: Ralph Lowell III (Rafe) and his wife Priscilla of Sherborn, Evelyn Lowell Lynch (Vee) and her husband John of Moretown, Vt., and Amy Lowell of Greenfield, N.H. He was the adored Grandpa to six grandchildren: Abigail Lowell Barjum of Wellesley, Emily Lowell of Dover, Robert Lynch and John Lynch (Mac) of Moretown, Charlotte MacAusland of Reno, Nev., and Dorothy MacAusland of Westmoreland, N.H. He also leaves four great-grandchildren, Abbott, Archer, Bayley, and Channing; his sister, Lucy Grimm, and his brother James Lowell; numerous nieces and nephews; and his two devoted caregivers, Nancy Nevin and Nana Atuahene of Martha’s Vineyard, who helped Joan and him immensely during the latter years of their lives and for whom he cared dearly. Ralph was predeceased by an older brother and three sisters: John, Charlotte, Emlen, and Susan.

At his request, a private family service will be held in Nahant. In lieu of flowers, donations may be made in Ralph Lowell’s name to the Nahant Historical Society, 41 Valley Road, Nahant, MA 01908, and the Sheriff’s Meadow Foundation, P.O. Box 1088, Vineyard Haven, MA 02568.