Alan Schofield Parkes passed away on June 2 at home in Chilmark. He was 88. 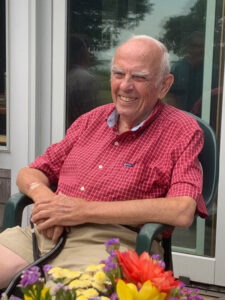 Alan was born, along with his twin, John, to William and Mary (Heister) Parkes in Philadelphia, Pa., on Dec. 5, 1933. He attended Swarthmore College, where he earned a degree in psychology in 1955. He then earned a Ph.D. in physical chemistry from the University of Pennsylvania, with postdoctoral work at Cornell. He went on to work at JEOL USA for more than 25 years as a senior scientist, where he worked on electron microscope technology.

Alan met and married his wife, Susan, in 1988. Following his retirement in 2005, Sue and Alan split their time between Chilmark in the summer, and Tucson in the winter. They also enjoyed traveling overseas and to the French Caribbean.

To his friends and family, he was known for his love of cats, woodworking, enjoying cocktails on the deck at sunset, and baking delicious apple pies. Alan had a passion for playing and watching tennis. He loved following New England and Pennsylvania sports, and rarely missed a televised game of his favorite teams. He and Sue also relished many seasons of rooting for the UofA Lady Wildcats softball team while wintering in Tucson.

Alan was preceded in death by his twin brother, John H. Parkes; and by their parents, William and Mary Parkes. He is survived by his wife, Susan Kraetzer Parkes; stepsons Peter Loges (Mary Beth) of Harvard, and David Loges (Lisa) of Memphis, Tenn.; three step-grandchildren, Heather Loges Child, Gregory Loges, and Robert Landman; and two daughters by a previous marriage.

Donations may be made to Visiting Nurse Association of Cape Cod, 255 Independence Drive, Hyannis, MA 02601, or to the ASPCA at aspca.org/ways-to-give, or to the charity of one’s choice.