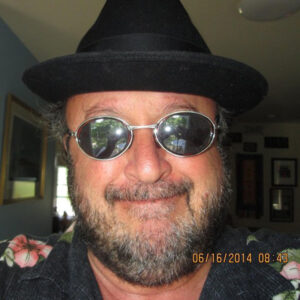 He was born on Feb. 12th, 1955, and grew up in Braintree, where he attended Braintree High School, and then finished his education at the University of Massachusetts Boston.

Steve came to Martha’s Vineyard in the early 1970s, and never left. While he ventured on various trips throughout his adult life, he held a love for the Island that was unique, and he considered Martha’s Vineyard his home, a place that suited his inner being.

Steve held many jobs here, and eventually started his own house-painting and caretaking business. His real talent, though, was helping anybody he could, clients and friends alike, in whatever manner he could. Through his hard work in his business, he became like a son to many of his clients, who always trusted his reliability and professionalism, and enjoyed his friendship.

His deep passion was music. One would be hard-pressed to find anyone who held a more vast wealth of knowledge on the subject than Steve. He was proud of and enjoyed his broadcasting spot on WVVY, a local radio station, by which he brought his own broad proficiency of unique music to a vast array of listeners on his radio show, “Stavros’ Cosmic Chicken Coop.” He considered this a great accomplishment in his life, and he had every right to reflect on it as such.

Steve shared his home on the Vineyard with many a cat over the years, and was a true animal lover. He also had a passion for vintage decor that described his personality to a T. He was a staple at the Hot Tin Roof in its heyday, and comfortably mingled with all of the Island legends and characters of that time. He was a compassionate man, and his dedication to his two daughters was exemplary.

Steve is survived by his beloved daughters, Ariel and Shelby; his older sister, Gail; his cat, Vinnie; and a multitude of lifelong amigos.

May his soul continue to swirl around the Island with the blowing winds and drifting sands.

A remembrance and celebration of Steve’s life is planned for a later date.