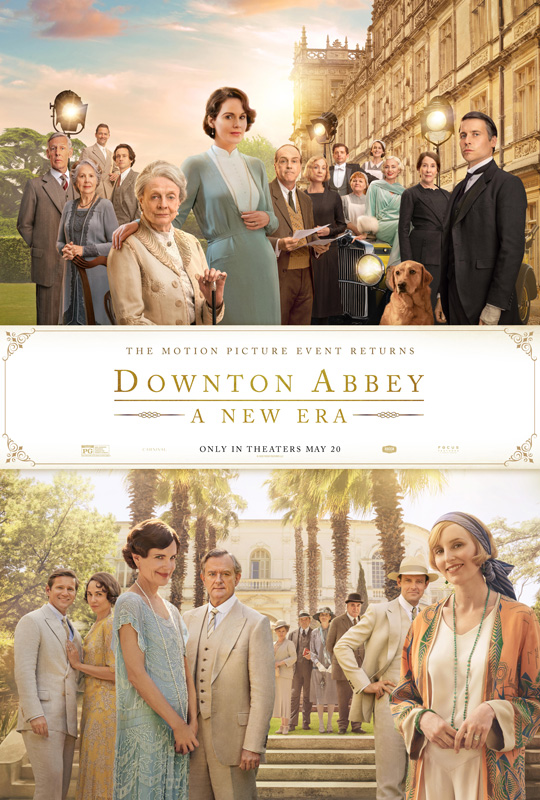 “Downton Abbey: A New Era,” that stylish turn-of-the-century soap opera, will play at the M.V. Film Center beginning Friday, June 10, and is also playing at Edgartown Cinemas. This time the Grantham family packs up and heads for the south of France.

The year is 1927, and the story begins with a wedding. Tom Branson (Allan Leech), the widowed son-in-law of the Earl of Grantham (Hugh Bonneville), marries Lucy Smith (Tuppence Middleton), the illegitimate daughter of Lady Bagshaw (Imelda Staunton).

The aristocratic family that viewers know and love travels to the Riviera. The reason for this change of venue is that Violet Crawley, dowager countess of Grantham (Maggie Smith), informs the family that she’s inherited a villa in the south of France from the now-deceased Marquis de Montmirail — now that’s enough of the actors’ names in the Grantham extended family! Violet plans to bequeath the villa to her great-granddaughter Sybbie.

Meanwhile, a film company wants to use Downton as the setting for “The Gambler,” a silent film, but the resistant earl opposes it. His daughter Lady Mary, now managing the Downton estate, however, thinks it’s a good idea, since the film company’s payment will allow repair of the estate’s deteriorating roof.

Members of the family, except for Violet, still ailing, arrive in the south of France. Lord Grantham’s wife Cora is discovered to be fatally ill. To top things off, Violet and the late Marquis may be the true parents of the Earl. So it is that a stunned Earl of Grantham faces losing his father, his earldom, and his wife.

The “Gambler” director, Jack Barber, romances Lady Mary, whose husband is gone for long lengths of time, but she plays cagey. Because silent films are no longer profitable, the film studio decides to cancel production. Lady Mary rescues the film by suggesting that its voices be dubbed. The actress Myrna Dalgleish has a voice that isn’t suitable for dubbing. So Barber persuades Lady Mary to dub Dalgleish, who threatens to quit. Downton servants Anna and Daisy convince Myrna to stick with the film.

The family returns to Downton Abbey. It turns out that Cora will survive, since she has been diagnosed with pernicious anemia, a milder form of illness. Cora goes on to train Myrna to acquire an American accent, thereby saving her career. In yet another permutation, Lady Edith decides to go back to work at the magazine she owns. Nearly bankrupt, the film company cannot afford to pay its extras, so they walk out. Luckily, Downton’s staff takes over and replaces them so the film can be completed. Joseph Molesley, who no longer works as a butler for Isobel Crowley but as a teacher, is hired to be a screenwriter and, lo and behold, proposes to Phyllis Baxter with a shocking aftereffect.

At last, Violet assures Lord Grantham that he is the son of the previous Lord Grantham, not of the Marquis de Montmirail, so he is rescued from his questionable parentage, as well as from his wife’s fatal illness. Violet’s health continues to decline, with a surprising outcome.

The costumes and settings of this classic story remain as charming as ever, and the characters are developed in new and interesting ways, or else keep their distinctive personalities. As “Downton Abbey: A New Era” concludes, could yet another sequel be in the offing?

Information and tickets to “Downton Abbey: A New Era” are available at mvfilmsociety.com, and information about films playing at Entertainment Cinemas in Edgartown can be found at entertainmentcinemas.com/locations/edgartown.