Antone John deBettencourt, Jr., 76, passed away on Saturday, May 28th, 2022, peacefully in his sleep at home in Merrimack, N.H. 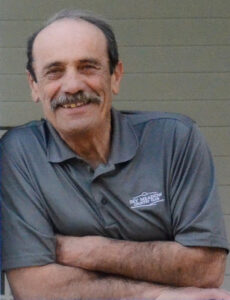 Tony was born to Gloria (Coutinho) and Antone J. deBettencourt Sr. on Dec. 5, 1945, in Oak Bluffs. He was a graduate of the Martha’s Vineyard Regional High School, and a veteran of the Vietnam War, during which he received a Purple Heart for his wounds suffered in combat. Upon his return, he settled in New Hampshire, married, and started a long career in the golf course

industry. He held a variety of positions throughout the years, from mechanic to superintendent, at several local courses. He was a longtime member of the Golf Course Superintendents Association of America.

Known for being able to fix anything with an engine (and many things without), Tony was always ready with advice, tools, or a hand to help bring all kinds of machinery back to life. His best times were riding his Harley with his friends to faraway places like Sturgis, S.D., and Myrtle Beach, S.C., as well as nearby ones like Laconia and Hampton, N.H. He enjoyed holidays and summers on Martha’s Vineyard with his family, watching the Patriots, playing chess with his grandkids, and solving sudoku puzzles.

Tony will be missed and never forgotten by his daughter, Lisa Caldwell, and her husband Christopher of Westford; and by his son, Antone deBettencourt III, and his wife Michele of Westerly, R.I. He was a proud Bubba to his six grandchildren, Tristan, Logan, Brennan, Taylor,

Sydney, and Dylan. He was predeceased by his wife of 47 years, Louise; his younger sister,

Relatives and friends are invited to attend calling hours on Thursday, June 16, from 4 to 6 pm at the Rivet Funeral Home, 425 Daniel Webster Highway, in Merrimack, N.H. The family requests all who attend to wear masks indoors during these hours. He will be laid to rest on Martha’s Vineyard.

Memorial contributions in Tony’s honor may be made to the Disabled American Veterans at dav.org. To leave a message of condolence online, visit rivetfuneralhome.com.