Conrad G. Kurth Jr., of Road to the Plains, Edgartown, passed away peacefully with family members beside him at Brigham and Women’s Hospital on April 28, 2022. He was 80 years old. 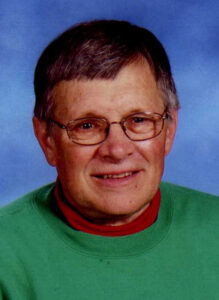 He was born on Nov. 18, 1941, in Brooklyn, N.Y., and attended P.S. 22 in Queens before his family moved to the Island in the mid-Fifties. Despite being in a near-death car accident in 1958, he was a member of the last graduating class from Tisbury High School in 1959. After high school, he enlisted in the Army in 1962, and was honorably discharged in 1964, and he was later a longtime member of the Vineyard Honor Guard.

On June 1, 1973, he married Sara McLane in Wareham, and they were together for over 49 years. He worked for 37 years at the Edgartown Elementary School, where his smile and persistently positive attitude made him beloved by both the students and his colleagues. He was also a former cemetery commissioner in Edgartown, a former commander of American Legion Post 257 in Vineyard Haven, and later a former commander and member of American Legion Post 186 in Edgartown.

Although moving to the Vineyard when he was just a teenager, he remained a diehard fan of New York sports teams until the end.

He is survived by his wife, Sara; by his son Adam and his wife Ashley; his two loving grandchildren, Evan and Hannah;, his brothers and sisters Pamela Zimmer (Tom), Gary Kurth (Beth), Greg Kurth, Deborah Searle (Alex), Arlene Kurth (Elizabeth), Wendy Winner (Ron), and Wayne Kurth (Gigi); his sister in-laws Anne Kurth and Linda Andrews; his brother- and sister-in-laws in the McLane family, and many nieces and nephews and other family members. He was predeceased by his father Conrad G. Kurth; his mother Georgiana Kurth; his brothers Jeffrey, Mark, and David; his father and mother in-law, Robert and Mary McLane; and other family members.

Conrad was laid to rest in a graveside ceremony with military honors at the New Westside Cemetery in Edgartown on May 6, and a reception celebrating his life was held afterward at the Wharf Restaurant in Edgartown. In his memory, donations may be made to a charity of your choice. For online guestbook and more information, visit chapmanfuneral.com.