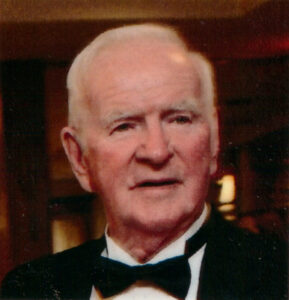 Jim was drafted in 1942, and became a bombardier and navigator in the 8th Army Air Corps. His flight leader and fellow war veteran was the famous actor Jimmy Stewart. Two years later, at the age of 20, Jim became an officer. On Sept. 27, 1944, during his 11th mission on a bombing run over Kassel, Germany, his plane was shot down, and he was captured and taken prisoner of war. Eventually, 2nd Lieutenant Dowling returned home as a decorated war veteran. He is featured in the “Faces of War” video series, and has an entire chapter written about him in Tom Brokaw’s book “The Greatest Generation.”

Not long after returning home from the service, he married his high school sweetheart, Dorothy, fathered eight children, and continued to be a shining example of service and sacrifice for his family, friends, and community. During this time, he started both a construction business and Red’s Seafood. He delivered clams all over the tri-state area, including Fulton Fish Market in downtown Manhattan. He started a “Peewee” baseball league for children in the neighborhood that became the St. James Little League, and served as its president for 18 years.

Continuing his legacy of service, Jim Dowling was elected Smithtown highway superintendent from 1960 to ’98. By operating the department like the military, he successfully created 250 miles of permanent roads, along with multiple major town construction projects. In addition, he altered the way the municipality dealt with snowstorms by making it more proactive, which set the precedent for a system that is implemented nationwide to this day.

After retiring from the highway department, Jim discovered a passion for rebuilding Model A cars, which continued until a few years ago. During his Vineyard visits, he was known to “go shopping”: scouring the dumps for Model A parts! Jim was an avid golfer, and one heck of a gin rummy player! He was a member of St. George’s Golf and Country Club in Stony Brook, N.Y., for over 50 years.

He is lovingly reunited in heaven with his sweetheart, Dorothy Dowling. He will be remembered as a loving Dad to James Dowling Jr., Douglas and Jeanne Dowling of Vineyard Haven, Jeffrey and Aniela Dowling, Janet and Brett Weingarten, Jean Dowling, Elizabeth and Robert Elderkin, Gregory and Donna Dowling, William and Christine Dowling; and as an adored Pop of 25 grandchildren, 33 great-grandchildren and one great-great-grandchild.

Jim Dowling lived an amazing life, and loved every minute of it. He will be greatly missed.