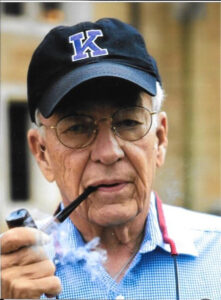 Father Fenn was born in Cleveland, Ohio, on March 2, 1934, the son of Fred M. and Sarah Lewis Fenn. He grew up in Bay Village, Ohio, and in 1953 he graduated from Bay High School, and Kenyon College in 1957. Upon graduating, he joined the U.S. Air Force, where he spent four years doing counterintelligence work, two of them at the U.S. Embassy in Manila, the Philippines. From there he entered the Episcopal Theological School in Cambridge, graduating in 1964, and was ordained to the priesthood. He also did postgraduate work at Oxford University in England. He served churches in Pittsfield and Wilbraham before moving to Jamestown, N.Y., where he was rector of St. Luke’s Church for 22 years. He said that he was one of those fortunate people whose job was always a source of great satisfaction and pleasure.

In 1999 he retired with his wife, Marcia, to a small bungalow on Martha’s Vineyard. While on the Vineyard, he enjoyed serving at St. Andrew’s Church in Edgartown on occasion. He was active in Rotary, and traveled with a group of fellow Rotarians to Peru, delivering wheelchairs to many disabled children and adults. He was also on the boards of the Edgartown library and the Martha’s Vineyard Rod and Gun Club. In need of more care they moved, in the early months of COVID, to a continuing-care retirement community in Fort Myers.

He had the most wonderful sense of humor, was always ready with a joke or two, could spin a tale (true or not), always with a broad smile and a twinkle in his eye. He was a voracious reader of, well, everything, a strong supporter of his beloved Kenyon College, and he loved his pipes, which were always lit either between his teeth or in his hand.