Rosalee Barnes McCullough died at her home on Music Street in West Tisbury on June 9, 2022. She was 89. 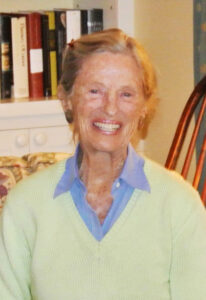 Rosalee was born in 1933 in Taunton to Doreen Kane and Clarence A. Barnes of Mansfield. She attended the Mansfield schools, and was a graduate of the Ethel Walker School in Simsbury, Conn., and attended Vassar College in Poughkeepsie, N.Y. She and her family lived in the summer months on Waban Park in Oak Bluffs.

In 1951, while visiting a friend in Pittsburgh, she met David McCullough. They were married in 1954, and lived in New York, Connecticut, Virginia, Vermont, New Mexico, Washington, D.C., Maine, Boston, and Hingham. In 1965, they bought their house on Music Street, where, while raising five children, Rosalee provided constant and invaluable support to David in his work as editor, writer, narrator, teacher, speaker, and in television.

Rosalee was appreciated by those who knew her for her kindness, honesty, optimism, energy, humor, grace, her powerful and balanced mind, and love of conversation. She was always productive, helpful to her extended family, she was practical, enjoyed a good party, and she loved to dance. When asked, she always provided great perspective and wisdom. She was relied upon for her moral compass. She was devoted to David. She was happiest when with friends and family.

She is survived by her husband, David; her children Melissa (John McDonald), David Jr. (Janice), William (Cissy), Geoffrey (Signe), and Dorie (Tim Lawson); 19 grandchildren; two great-grandchildren; and her sister, Margot Barnes Goodwin. She was predeceased by her brothers Thomas, Samuel, and Peter Barnes.

A private graveside service will take place in July in West Tisbury.

Donations in her memory can be made to the West Tisbury Library Foundation, P.O. Box 1238