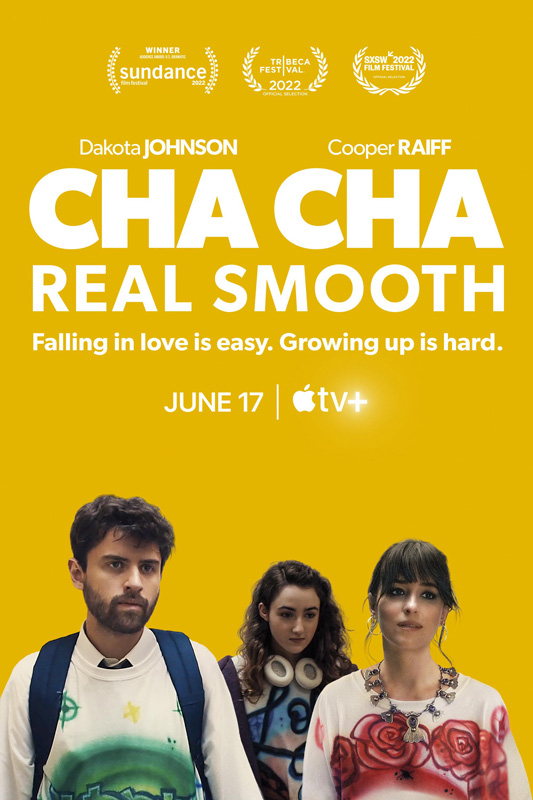 The delightful “Cha Cha Real Smooth” begins at the M.V. Film Center on Friday, July 1. Although the title is a bit kookie, this comedy will sweet-talk visitors into an enjoyable time. Cooper Raiff writes and directs a story about a verbally expressive bar mitzvah party starter named Andrew, played by Raiff.

Andrew can talk his way into and out of any situation he’s confronted with. And he does that with Lola (Vanessa Burghardt), who’s autistic, and Lola’s mother Domino (Dakota Johnson). Viewers meet them at a dance-filled party, and Lola’s condition is signaled by her clothes and the headphones she has around her neck, with “R” and “L” prominently displayed on them. Viewers will notice there’s subtle chemistry between Andrew and Domino. Andrew tells Domino that for $300 he can get Lola to dance, a seemingly unlikely feat. He does just that, though, with his verbal magic.

In the meantime, Domino disappears into the Ladies Room, and at Lola’s behest, Andrew heads there to find her in a stall crying. With blood on her dress — not for the reason Andrew thinks at first — she refuses to come out. Andrew retrieves some of the ongoing party’s oversize T shirts, which allow her, Lola, and himself to exit. Andrew drives them home, and although she insists she feels fine, Domino again starts crying. It gradually becomes evident that she’s had a miscarriage, and her fiancé Joseph (Raúl Castillo) doesn’t seem to know she’s been pregnant.

In one of the visual jokes that crops up, Andrew discovers that Lola’s room is filled with the potato mashers she collects. While he’s in Lola’s room, Andrew is also introduced to her pet hamster Jerry, in another subtle comic turn. A Rubik’s Cube is one of the puzzles Lola is obsessed with, and accomplished at. Another marker for her is that David (Evan Assante), Andrew’s younger brother, calls her out for being in the same grade as he is, although she’s much older.

Once Lola is in bed, Andrew goes downstairs and finds himself with Domino, who tells him, “I feel very comfortable with you.” Andrew asks Domino what depression feels like, to which Andrew responds that his mother is bipolar. Then Domino kisses him, and when things get slightly passionate, Andrew mutters, “I don’t feel like it.” Yet in the next scene he’s shown having sex with Tulane classmate Macy (Odeya Rush), where a condom plays a somewhat comic role.

Life goes on its mundane way, with Andrew continuing to work as a party starter, inspiring lots of dancing. In a subplot, he gives advice to David about how to kiss his would-be girlfriend Margaret (Brooklyn Ramirez). It’s important to learn who the actors are playing these characters, because of the significant roles they play in the movie.

Visitors meet Andrew’s mother, who tells him he’s way too good for Maya (Amara Pedroso), whom he’d said early on that he wanted to join in Barcelona. Viewers learn a lot about the movie’s characters from the very realistic conversations they have. As a result, “Cha Cha Real Smooth” is a very satisfying comedy.

Information and tickets for “Cha Cha Real Smooth” are available at mvfilmsociety.com. For information on what is playing at Edgartown Cinemas, visit entertainmentcinemas.com/locations/edgartown.