For centuries at least, there has existed a tradition of amateur study of nature. During the 20th century, observing nature achieved real popularity as a hobby, first in the forms of birdwatching and botany, then later in the study of butterflies and dragonflies. In the waning years of the 1900s, workable field guides became available for many other groups of wildlife. And then the advent of digital photography and the internet wrought a true revolution: Identification resources proliferated, even for formerly obscure corners of nature, and the flow of information and co-operation widened into a torrent.

All of that evolution has created a growing, cohesive community of nature enthusiasts, linked together by social media. One result, perhaps an inevitable one, was the invention of the “bioblitz” — an intensive group effort to document as many species of wildlife as possible during a given time frame (often 24 hours) on a particular property. These events combine serious nature study with a social element, as participants share their knowledge and enthusiasm.

While there are certainly other ways to run one, most bioblitzes use the citizen science platform inaturalist.org as the tool for recording sightings. In what I believe was the first such event held on Martha’s Vineyard, the Trustees of Reservations and the organization I work for, BiodiversityWorks, teamed up to bioblitz Long Point Wildlife Refuge on June 17 and 18.

We enlisted a small group of experienced observers and iNaturalist users to serve as team leaders: Pete Gilmore and Trustees ecologist Shea Fee led a birding group, botanists Margaret Curtin and Greg Palermo led a team focused on plants, wildlife biologist Luanne Johnson led a generalist team, and also added some sophisticated survey methods; and yours truly led a team focused on insects. Molly Peach Mayhew of the Trustees led family-friendly aquatic sampling using a variety of nets to glean minnows and invertebrates from Long Cove Pond. We invited friends and supporters join a team or search for wildlife on their own.

In the end, 14 people took to the field, not counting participants in the pond sampling. The event began Friday night, with Luanne Johnson, founder and director of BiodiversityWorks, deploying a bat detector (a special audio recorder that records bat vocalizations) and live traps for small mammals, minnows, and turtles. Meanwhile, I erected and manned a moth sheet — a white cloth set up at night and illuminated by ultraviolet lamps, which moths and other nocturnal insects are drawn to.

Assisted by Janet Woodcock at the moth sheet, I logged about 35 species of moths, several beetles, a few types of flies, and astronomical quantities of nonbiting midges. (Unfortunately, “nonbiting midge” was as precisely as I could identify them, and despite their vast numbers, it appeared that only two species were present.)

The following morning, leaders and event participants convened at Long Point’s winter parking lot for a brief orientation, after which teams dispersed to canvass promising habitat. We could hardly have asked for better conditions: There was a bit too much wind for optimal observing and photography, but the day was sunny, cool, and dry. Most of us took a midday break, then hit the field again for part of the afternoon; as I drove out after ending my day, I passed Margaret, Greg, and Janet, still hunting plants.

The way iNaturalist works is that observers upload photographs or sound recordings, which can then be identified by some combination of the original observer, an artificial intelligence application built into iNaturalist, or other observers, who can see, comment on, and suggest identifications on anything that is posted. Over the days following the bioblitz, a stream of observations flowed into iNaturalist, and one by one, those observations received identifications at varying levels of precision. About 65 percent of the observations have been firmly ID’d to the species level.

As I write this, the dust has more or less settled. A total of 484 observations were entered into iNaturalist, and 46 species of birds were entered in eBird (another citizen science platform, this one dedicated specifically to birding). In all, the bioblitz documented 313 species, a number that may evolve over time, but is probably close to final. You can view our iNaturalist results here: bit.ly/MVBioblitz.

The number surely understates the true diversity of this remarkable property. But it’s also an impressive number for one day of work, and it included many rare or uncommon species and a good number of first Vineyard records in iNaturalist. So the event added significantly to our understanding of the Island’s biodiversity, and most of all, it was fun!

Studying nature as a hobby, of course, won’t appeal to everyone. And even among those to whom it does appeal, sinking a weekend day into a bioblitz may not be a priority. But our initial event was an unqualified success, and there will be more. 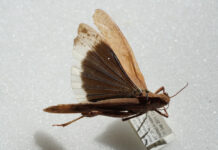 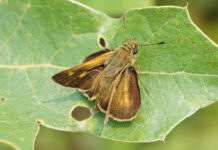