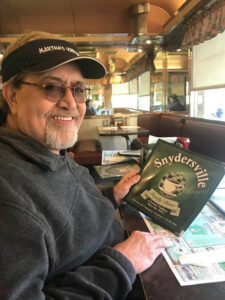 Larry graduated from Pocono Central Catholic High School in 1971, and then went on to the Philadelphia Institute of Computer Science. He worked in the family business at Pocono Metal Products in Stroudsburg, Pa. He then served as supervisor for Hamilton Township for many years, followed by his own business, Snyder Construction and Consulting, on the Vineyard. He was very proud of a town that was named after his family, called Snydersville.

He was predeceased by his daughter Courtney Snyder of Tannersville, Pa. He is survived by his daughter Melonie Schmid and her husband Paul of East Stroudsburg, Pa.; his grandchildren, Nathan Schmid, Isabella Snyder, and Chase Snyder; by his sister, Debra Moyer and her wife Kiley of Northumberland; and by several nieces, aunts, uncles, and cousins. Services were held on June 20 at Holy Trinity Church, Monsignor McHugh Center.