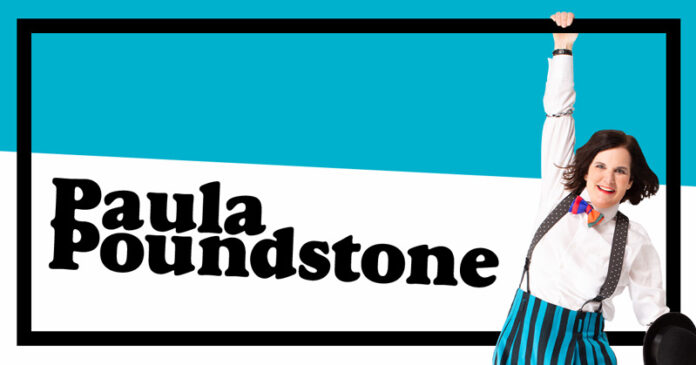 Paula Poundstone brings her spontaneous wit to the Performing Arts Center on Saturday, July 16, with an 8 pm show. The Times spoke with Poundstone, and she agreed that spontaneity is one of the cornerstones of her shows and her humor.

“Standup? I do it mostly the same way I’ve always done it,” Poundstone said in a phone call. “My act is not scripted. I certainly say things I’ve said before — I have 43 years of material rattling around my head. I do ask the audience questions, like where are you from, what do you do? I have a conversation with the audience that is unique to that night. Very much like a conversation you have anytime.”

Poundstone grew up in Sudbury and traveled the comedy club circuit throughout the 1980s. She won a CableACE Award for her HBO special “Cats, Cops and Stuff” in 1990, the first woman to win the award for Best Standup Comedy Special. She started her comic career in Boston in the late 1970s, and now hosts a weekly comedy podcast called “Nobody Listens to Paula Poundstone.” Poundstone is also a regular panelist on NPR’s comedy news quiz, “Wait Wait … Don’t Tell Me!” She’s also written two books: “The Totally Unscientific Study of the Search for Human Happiness” and “There’s Nothing in This Book That I Meant to Say.”

Growing up, Poundstone said she had different ideas about her future at different periods in her life. “For a little while I wanted to be a lawyer, because I loved Perry Mason. This was awfully young. I never saw his first one, but it was on reruns, and I loved it. In first grade I briefly thought I wanted to be a flight attendant because my father traveled a lot, and I wanted to be on the plane he was on,” Poundstone remembers. She said she idolized performers Carol Burnett, Mary Tyler Moore, and Gilda Radner.

Once she started doing standup and getting more comfortable, she was on her way. In the beginning, Poundstone relied a lot on her interaction with the audience, just as she does now. If she did try to write down parts of an act, she would get distracted by the audience and forget where she left off. Rather than look at it as a negative, she learned to roll with it. “It took me probably a year to figure out that that’s where the heart of the night was for me. Those moments were the best part. I began to embrace it,” she explains, “much like Dumbo’s ears when his manager Timothy Mouse says, ‘The very thing that brought you down will carry you up, and up, and up.’”

Poundstone said she gets material from anywhere and everywhere: “I feel like I have a Roomba in my brain. Every thought, everything that happens is somehow being vetted and strained to see if I can get anything from it.”

She says she loved the old radio comedians Bob Elliott and Ray Goulding, tuning into their show when she was in high school. Later, when Poundstone went to a residential school for troubled kids, she brought a copy of their book “Write If You Get Work: The Best of Bob and Ray” with her.

“I used to read it aloud to the kids in my room, and they loved it,” Poundstone remembers. “It made me feel like I was a gifted performer … I was reading it the way they delivered their lines.”

Poundstone is still on the road, travel being her least favorite part of the job.

“It’s achy, sore, bone-crunching travel. It’s a little challenging, but well worth it. My best part is the audience. I love the sound of laughter, I always have. When I was a kid, my mom would have friends over to play canasta, and she’d put the television in her bedroom and tell us we could watch TV in her bedroom just to get rid of us. I loved the sounds of laughter from her friends. The beloved Mrs. Hollis was from Maine, and she had the greatest cackling laugh. My sister said it was annoying. I was always thinking of things I thought might make them laugh and then saying them.”

The connection between the performer and the audience is special, Poundstone described, and when COVID hit, the uncertainty about performing live again was difficult.

Poundstone said that when the audience laughs, they do it because they can relate to what is being said.

“One of the great things about standup — or attending any show — is that we’re laughing at stuff because we recognize it … ‘Oh my God, I had that weird thought … my parents were like that …’” Poundstone said. “It’s like you’re caught up in waves of laughter … The communal responses are so gratifying, and it makes you feel more of a part of a whole, and that works for the performer as well. I’ve blurted out things and I think no one is going to get what I’m talking about … but when you make the connection it’s so fulfilling.”