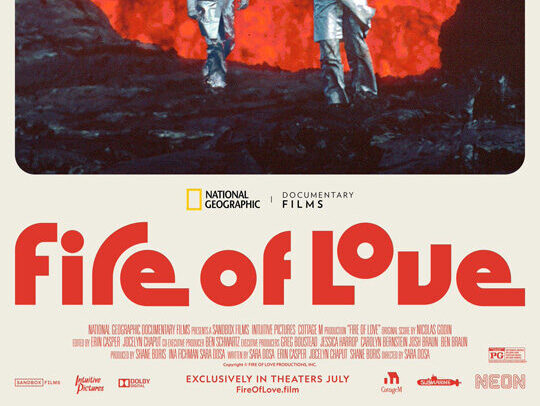 Back from the Environmental Film Festival in May comes the spectacular documentary “Fire of Love.” A National Geographic film, it returns in more detail to the M.V. Film Center on Friday, July 22. The love story concerns two French volcanologists, Maurice and Katia Krafft. They met in 1966 on a blind date in Alsace, married in 1970 and were a loving couple to the end of their lives.

“Fire of Love” begins by showing them driving through challenging deep snow to learn more about an active volcano. It is an example of how these explosive events happen in any environment. Katia is a geochemist, and Maurice, a geologist. Katia concentrates on the specifics of volcanoes, while Maurice focuses on their broader activities and movements.

They begin by exploring the mysteries of the natural world, focusing on volcanoes, which both are fascinated by and obsessed with. They have taken thousands of photographs of the events, shown in breathtaking detail throughout the film. The Kraffts explain that volcanoes occur in the boundaries between two tectonic plates. Their worldwide explorations are financed by grants, and later by books and lectures.

Volcano bombs are the rocks emitted from an exploding volcano, and each one is unique. That is a point the Kraffts make about volcanoes, and probably the reason they visit so many of them. They are known as freelance or volcano runners. “Curiosity is stronger than fear,” they observe.

The Kraffts explain that there are two classes of volcanoes, those known as red and the others as gray. The red ones happen when the earth’s tectonic plates pull apart, creating up to 1,200 centigrade temperatures. The film illustrates this with Maurice frying eggs on top of the hot surface. Katia explains their interconnectedness in detail per shot and also says she fears losing sight of Maurice and never seeing him again. In 1977, they visited Nyiragongo in Congo and illustrated the destruction possible from an erupting volcano. One hundred people died there. “It will kill me one day, but that doesn’t bother me,” Maurice says.

They traveled to Indonesia in 1979, where they had to be in total sync with the volcano. They must be philosophers to take on a volcano, they explain, and suggest they are not religious but scientists instead. The protective gear and helmets they wear while researching make them look like space travelers.

Maurice describes his childhood dream of floating down a river of lava. Instead, they boat through a lake of sulfuric acid, the largest concentration in the world.

They discuss the triggers of volcanoes and their fuses. The Kraffts’ next observation is of the gray volcanoes that they spend the rest of their lives exploring. “We’re the only ones who specialize in the killer gray volcanoes,” they say.

A trip to Colombia where mud flows from an eruption resulted in a 22,000 to 23,000 death toll because the people ignored the Kraffts’ warnings on volcanoes. They make visits to Japan, then Alaska, where they take the last known shot of a volcano in the rain.

It’s hard to digest as much about volcanoes as this fascinating film provides. But the stunning images alone make it worth watching.

Information and tickets for “Fire of Love” are available at mvfilmsociety.com. For information on films playing at Edgartown Cinemas, visit entertainmentcinemas.com/locations/edgartown. 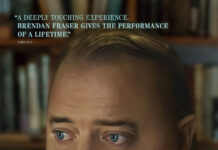