Prince Hal is a handsome middle-aged long-haired cat. Other than recurrent bouts of urinary tract issues in his youth, Hal has not had much occasion to visit me. We recommend annual physical exams, but Hal’s owner generally has reserved veterinary visits for acute illnesses and rabies vaccinations. Add the pandemic, and the result was I hadn’t given this little prince a full once-over in several years. Then, this winter he came in for me to check a few things, including a recent history of coughing. Whenever I see a cat who goes outside and has long hair who is “coughing,” two common ailments come to mind: internal parasites such as roundworms, and hairballs.

Cats usually contract intestinal parasites in three ways. Infected nursing mothers pass parasites to their kittens through the milk. Adult cats get infected by eating small prey that carry parasites. Finally, infection occurs when cats ingest soil during normal grooming — soil that has been contaminated with parasite eggs from the feces of other infected cats. Why would intestinal parasites make Hal cough? Well, sometimes Hal is gagging and retching, not coughing, but there is another reason. The life cycle of parasites such as hookworms and roundworms frequently includes a stage in which worm larvae migrate through the lungs. The cat then coughs them up and swallows them, so they end up in their final destination, the gastrointestinal tract. Just because you do not see worms in Hal’s stool doesn’t mean he is not infected. Treatment is the use of appropriate deworming medications.

Next we have to rule out hairballs. A cat’s tongue has little barbs that make it rough, and help Hal groom himself, but this can result in swallowing fur. Long-haired cats and cats who “overgroom” for reasons such as anxiety or allergies may swallow an excessive amount. Most cats will simply vomit the hairball or pass it out in their feces, but sometimes the hair wads up into a solid accretion in the stomach called a trichobezoar. This can result in regurgitation of food and irritation of the stomach lining. Any cat with additional gastrointestinal problems such as inflammatory bowel disease or motility disorders will have even more trouble expelling a trichobezoar. Most healthy cats who suffer from hairballs respond to simple remedies such as Laxatone or Petromalt — lubricant laxatives that are basically flavored petroleum jelly. The idea is to lubricate that wad of hair so it will break apart, or get sufficiently greased up to slide either up or down. In more persistent cases, Hal might need fiber supplements and/or motility drugs.

Prince Hal’s mother tried Laxatone. The cough stopped for a day, but then returned. We dewormed Hal. The cough persisted. “Could it be a problem with Hal’s heart?” his owner asked. Unlike dogs, cats with heart problems rarely present with coughing. Sadly, the most common presenting sign of feline cardiac disease is sudden death. If your cat is lucky, your veterinarian may notice something before such an event, and you can discuss whether to pursue a cardiac work-up. Diagnosis can be tricky. Radiographs and electrocardiograms may help, but the best diagnostic tool for cats is ultrasound of the heart (echocardiogram). I didn’t think Hal’s problem was cardiac, but agreed it made sense to take X-rays. I wanted to evaluate his lungs to rule out things like tumors, pleural effusion, pulmonary edema, cardiomyopathy, and pneumonia. Hal was extremely cooperative, and let us take his picture. His lungs looked good to me. His heart? Hmmm. Was it maybe a little bit large? I wasn’t certain. It probably only looked that way because the film had been taken during exhalation. Ideally, chest films should be taken at the peak of inspiration, when the lungs are fully inflated, but cats aren’t very good at listening to us about when to breathe in and breathe out. I shared the films with a radiologist and cardiologist. They were not concerned about the size of the heart, and felt cardiac disease was unlikely. Probably feline asthma, they agreed.

Feline asthma is fairly similar to human asthma — a recurring condition of the lungs in which the airways become inflamed and constricted, leading to coughing and wheezing. Symptoms can range from a mild cough to extreme difficulty breathing. Cats with severe asthma look distressed. They may breathe with their mouths open and their stomachs heaving, as they labor to move air. We also ruled out feline heartworm disease, a rare diagnosis here on the Vineyard, but Hal’s owner wanted us to be sure. Now what? With a tentative diagnosis of asthma, the easiest way to confirm is a therapeutic trial of corticosteroids, potent anti-inflammatories that quickly reduce inflammation in the lungs. These may be given by injection, orally, or even by inhaler. We gave Hal a trial course of oral prednisolone. He responded beautifully. Hurrah!

Asthma is usually an ongoing problem. Some cats have only mild seasonal asthma. Others have severe, life-threatening episodes, and suffer year-round. I advised his owner to remove anything from the environment that might be irritating to the lungs. Scented candles, cigarettes, strong aromatic cleaners like bleach or Pine-Sol. For now, Hal will continue on oral corticosteroids. Eventually we will wean him down to the lowest effective dose. Cats are more tolerant of long-term use of corticosteroids than many other species, but they can still occasionally develop serious side effects, such as diabetes. In those cases, we teach owners how to get their cats to use an inhaler attached to a special device with a kitty face mask. Designed specifically for asthmatic cats, it’s called an Aerokat and allows us to deliver corticosteroids directly to the lungs, thus minimizing other systemic side effects.

Every now and then, a cat can experience a truly life-threatening asthma attack. Do not wait. Seek veterinary care. These cats may require oxygen, bronchodilators, injectable steroids, and hospitalization. Prince Hal’s case, however, although chronic, seems to be easily controllable with prednisolone pills and TLC, an easy prescription to fill. 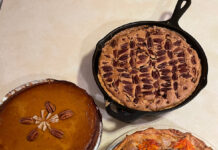 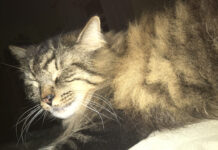