Dr. John Barry Thomas, 95, of Oak Bluffs, passed away on Thursday, July 14, 2022. Jack passed away peacefully at his home in Harthaven. 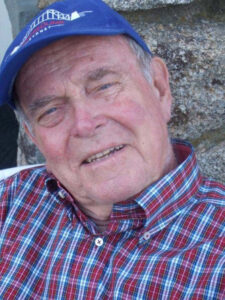 He was born in New Haven, Conn., on May 18, 1927, to Dr. John J. & Eileen B. Thomas. As a child, Jack enjoyed summers in Rockwood, Ontario, at the home of his maternal grandparents. Jack was valedictorian of his graduating class at Ansonia High School. He then earned his bachelor’s of science at Yale University, and his M.D. from Harvard Medical School. Dr. Thomas had a long career practicing internal medicine in Hartford, Conn. In fact, it was one of his patients who introduced him to Harthaven in 1969, where he eventually built his house. Jack and his family spent many of their summers there, and Jack ultimately retired there. He also lived in West Hartford, Conn., and Naples, Fla.

Jack had many interests and hobbies, including woodworking, cooking, sailing, and traveling. As a young man, he built several of his own sailboats, and in his later years he devoted many enjoyable hours to model shipbuilding. He was very proud of prizes he won at the Agricultural Fair for his loaves of bread and ship models.

Jack was predeceased by his wife, Ann Owens Thomas, whom he married in 1951. He is survived by his three children, Martha Osborne (Robert), Jack Thomas (Anne), and Matthew Thomas (Beverly); and his eight grandchildren, Thomas Osborne (Youn), Dr. Maggie Thomas (Dave Mich), Sarah Osborne (Justin Ovsak), Andrew Thomas (Katie), Hillary Minerd (Ben), Eileen Thomas, Brittany Thomas, and Owen Thomas. In his later years, the light of his life was his great-grandchildren: Madeline, Margot, Jojo, Sage, Clayton, Harry, and the newest addition to his family, Sloane. Jack had recently celebrated his 95th birthday surrounded by many of his family members.