Eleven HHSA sailors enjoyed the snappy 15- to 20-knot southwest wind for the entire Thursday evening race on July 28. All finished in about 45 minutes, with Truckin’, Zander Meleny’s J 70, being first across the line by 43 seconds. After handicaps were calculated, however, the winner was Alex Pardo, sailing a VHYC Sonar. The second spot was taken by Artful Dodger, Mike Powers’ Tartan 3500 from Falmouth. Mo Flam brought his Alerion 28, Penelope, into third, crossing the finish line just 28 seconds after Artful Dodger. Afterward Gina Stanley, as this summer’s chef at the Vineyard Haven Yacht Club, continued to surprise and delight all sailors and others who had the good sense to stay for supper.

As Sunday didn’t seem to be a promising race day at first, the starting signal was postponed for 35 minutes. A certain amount of confusion ensued, as a sudden shift from a light northeast breeze into a surprising 12-knot southwest wind, the simultaneous dropping of the postponement flag, and the start of the countdown made for a bit of a scramble at the start. The confused rounding of the first mark made for even more excitement that was resolved by allowing either side to be legitimate. Sloppy conditions in the Sound presented no problem for Alan Wilson, though, who sailed his Stuart Knockabout into first place, with Artful Dodger’s corrected time only 13 seconds behind. Woody Bowman made an appearance aboard Julia Lee, his 21-foot Catboat, and placed third.

This year’s Jewett Cup will take place on Saturday, August 6. It is held in honor of Frank Jewett, who was an Olympic sailor instrumental in the founding of the Holmes Hole Sailing Association. The idea was to have those with a variety of boats be able to compete in a friendlier way than the rather fraught one-design races at the time. Hence the handicapping system.

To register, go to the following link: regattanetwork.com/event/24880#.

To encourage participation, HHSA will pay the registration fee for Holmes Hole members. Those HHSA members who are not VHYC members should use the coupon code JBHH2022 at checkout. Those who are VHYC members but not HHSA members can pay the $25 fee with their regular charge numbers. We’re looking forward to a great turnout this year. 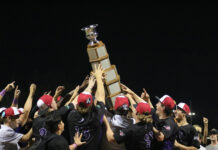