Robin Gottesman has been taking photos of the Vineyard for more than a decade. Last year she decided she wanted to explore a different perspective on scenes she’s been shooting for years. She purchased a drone, got her certification, and practiced flying and shooting around her winter home in New Jersey. Last summer, Gottesman tried out multiple aboveground viewpoints of the Island landscape, and she’s currently showing the resulting images for the first time at the Cousen Rose Gallery in Oak Bluffs.

“I’ve been taking pictures of Martha’s Vineyard for years,” says Gottesman. “I started thinking, ‘I wonder how this might look from up in the air,’ or ‘I wish I could get to that area over there, but it’s just marsh.’”

After earning her license and getting her skills up to speed, Gottesman started exploring some of those areas and viewpoints. Among the photos on display at the gallery are shots of the Edgartown Lighthouse taken from the air, with a gorgeous sunrise illuminating the scene, rocks on Lucy Vincent Beach captured from above with a wave forming intricate patterns as it swirls among the stones, and a lone canoe resting on calm seas, its slender outline and wood ribbing caught in full detail.

One of Gottesman’s favorite shots shows the sun rising over Felix Neck Sanctuary. Every curve of land with its many inlets is in evidence, as in a topographical map. Not only is the composition of the image only possible from above, the photographer explains that the lighting is unique as well. “From this area where I’ve taken a lot of pictures, I would have had to wait to see the sun rising. I was able to catch that moment before it would be visible from the ground. The colors are different than they would have been if I had waited.”

It took more than simply purchasing a drone with a camera for Gottesman to embark on her new adventure. She explains that in order to shoot anything commercially, you have to receive training and accreditation through the FAA. She says that she spent a considerable amount of time mastering the skills necessary to focus on flying and shooting simultaneously. Despite the work she had to put into launching her drone enterprise, Gottesman has been very happy with the results. “The things I hoped for are showing up,” she says.

Gottesman has shown her work at Cousen Rose for around 10 years. Her shots of beautiful spots around the Island, sometimes punctuated by a lone cyclist, runner, or dancer, have been very popular. More recently she’s mixed things up a bit with a couple of unique series, including shots from an Africa safari and a series of images of cadets at West Point.

Although she spent her working life in the medical field, Gottesman has had a passion for photography since high school. She completed medical school and practiced medicine for 26 years before deciding, upon retirement, to pursue photography full-time.

She has earned a reputation as a professional sports photographer in her home state of New Jersey. Gottesman spends every summer at her Oak Bluffs home, traveling around the Island to shoot. Since purchasing the drone, she is dedicating herself to exploring this new outlook on the Vineyard. “I’m getting a different look at things that I’ve taken a million pictures of in the past,” she says. “I have access to all kinds of places and views. I now have the ability to go higher [with the drone], and I’m excited to explore new possibilities.” 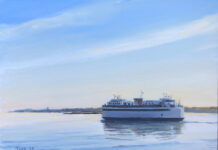