It was late in the day on August 27, 1689. Capt. John Kent of Newbury, Mass., was sailing his brig, Merrimack, from New York to Boston. With him were his mate, Robert Almeric, crewman Jonathan Woodman, and three passengers. As the sun was soon setting, they decided to anchor at “Homeses Hole” — today’s Vineyard Haven Harbor — and postpone crossing the shoals off Monomoy until the next day.

That afternoon they had noticed they were being followed through the sound by another vessel, which now pursued them into the harbor. The sloop, named Goodspeed, anchored next to them. It then raised a “bloody flagg” at the head of their mast. A red flag, the “Joli Rouge” popular with French pirates at the time, was an immediately recognizable signal of their dark intent. (This was a generation before the “skull-and-crossbones” was popularized by other infamous buccaneers.)

The pursuing captain appeared on deck and threatened to fire on them if they attempted to move. Ten armed men then raided Kent’s brig, forcibly removing 20 half-barrels of flour, two hogsheads of sugar, one hogshead of rum, a hundred-weight of tobacco, and three small firearms, before departing again into the twilight. Kent estimated the pirates’ numbers at about 25, most of them well-armed.

Martha’s Vineyard in 1689 was an island in metamorphosis. There were fewer than 350 settlers on the Island at this time; most were concentrated in the two settlements known as New Town (West Tisbury) and Old Town (Edgartown). The Wampanoag population of the Vineyard in 1689 was roughly three times larger — perhaps 1,000 or so — but this was a drastic decline from 40 years earlier when estimates put the native population at about 3,000. (A “great sickness” had befallen the Island’s Wampanoag during 1643-1646, followed by an epidemic of influenza in 1674 and “sore fever” in 1690. By the mid-1700s, barely 300 Wampanoag would survive.)

In 1689, the settler population of the modern bounds of Tisbury was 17. It consisted of two families, both religious outcasts from the Newtown settlement (in what is now West Tisbury).

Isaac and Mary Chase had built the first house in the future village. They lived on the hillside behind what is now the Educomp building, overlooking what they called the “homestead meadow,” Bass Creek, and the Lagoon. Chase was a Quaker by religion and a blacksmith by trade, but by 1689 he was also a tavern keeper and would become a ferryman as well. By 1689 they had seven children, the eldest not yet 12.

Dr. Thomas and Elizabeth West were the only other settlers in town. Outspoken Seventh Day Baptists, they lived not far away, near the modern Martha’s Vineyard Museum. A carpenter by trade, West was also a medical doctor and attorney. By 1689 they had six children, the eldest about 11.

There were a handful of Wampanoag families living on West Chop, too, although their names are mostly unrecorded. Survivors of the waves of plagues that continued to decimate their population, their local leader was Ponit, son of Cheesehahchamuk, sachem of Nobnocket (roughly coinciding with the Eastern half of modern Vineyard Haven. “Homes,” the old Wampanoag man thought to be Holmes Hole’s namesake, was presumably long-dead.) Although Governor Mayhew had originally intended to set aside the Vineyard Haven/West Chop area as reserved Wampanoag land, by 1689 that plan had long been discarded, and Chase and West had already obtained vast tracts from Ponit.

So it’s no surprise that no other witnesses to the overt piracy in the harbor came forward. The next day, Capt. Kent sailed to Edgartown Harbor where he filed a formal complaint (a “publique instrument of protest”) with Matthew Mayhew, who was Chief Magistrate, Chief Justice, and Sheriff of Dukes County. Capt. Kent’s goods “were taken wholly by force and constraint by piracie and robberie, and open violence,” Mayhew recorded.

The perpetrator was immediately identified: Capt. Thomas Pound, a former commander in the Royal Navy who had gone renegade from Boston in August with a co-conspirator named Thomas Hawkins, together with a number of other scoundrels, leaving a trail of woe behind them. The Goodspeed had been stolen at gunpoint off Provincetown just two weeks earlier.

Captain Pound returned to the scene of the crime in early September, chasing a ketch skippered by one Captain Alsop into Holmes Hole Harbor, “and if the inhabitants had not risen in force, would have cut her out,” according to one account. They gave up and sailed away. Whether Capt. Alsop’s Islander protectors were Wampanoag, members of the West or Chase families, or someone else, was not recorded, but the pirates were immediately identified as Pound and Hawkins and their gang.

Although Martha’s Vineyard was at this time a part of the province of New York, Mayhew sent news of the attacks to the Massachusetts Bay Governor and to the City Council of Boston. In response, the Council commissioned Capt. Samuel Pease (quite possibly the Edgartown native of that name) to search for the pirates with the sloop, Mary, and 20 well-armed men. They were instructed “to prevent ye Sheding of blood as much as may bee.”

Perhaps sensing that his days were numbered in these waters, Pound made plans to sail to Curaçao. But first, the pirates needed supplies. They intercepted a Pennsylvania sloop passing through the sound, but as it lacked the salt pork they were looking for, they let the vessel go.

On Sept. 30, 1689, the sloop Brothers Adventure of New London (Capt. John Pickett, master) anchored overnight in Holmes Hole with a load of provisions, headed for Boston. Early the next morning they headed out, only to be immediately intercepted by Pound and his crew just outside the harbor. They were forcibly boarded and raided for 37 barrels of pork, three barrels of beef, seven firkins of butter, 13 cheeses, three barrels of Indian corn, and eight bushels of peas. The pirates then retreated to Tarpaulin Cove, on Naushon, to make final preparations.

And that’s where Captain Pease found them. “Capt Pounds standing on the quarter deck with his naked sword in his hand flourishing, said, come aboard, you Doggs, and I will strike you presently,” recalled one eyewitness. Once again, Capt. Pound ran up the “red flagg” on their mainmast. The two ships then engaged each other “as fast as the weapons could be reloaded.” Six pirates were killed, and many more wounded. Pound was seriously injured in the side and arm. Pease was shot in the arm, the side, and the thigh, painfully succumbing to his wounds a few days later. Pound had “severall bones Taken oute” but recovered.

Pound, Hawkins, and their surviving gang were subdued, brought to Boston, and chained up in the city’s newly built stone dungeon (which, coincidentally, they shared with Mary Glover, “the Irish Catholic witch” whose mother had recently been hanged for witchcraft). The Rev. Cotton Mather, the well-known Puritan clergyman, visited and prayed with them at the prison. After a short trial, Pound and his men were condemned to death.

Surprisingly, all but one of the pirates were mysteriously pardoned in February 1690. Some theorize that Hawkins’ sisters used their powerful family connections. Others believe it was all a political ruse to save the recently deposed governor. Regardless, Captain Pound was released, and soon sailed to England as a free man.

Captain Pound certainly wasn’t the only pirate to infest our waters. Tarpaulin Cove was reportedly the last refuge of Capt. William Kidd and his crew before they were captured; “Quick’s Hole,” separating Nashawena Island from Pasque Island, is said to be named after Captain Kidd’s comrade, Capt. Cornelius Quick.

Thomas Mumper, “Indian of Mather’s Vineyard” (sic) was associated with the gang of the brutally psychopathic pirate Edward Low on the sloop Ranger. In 1723, as Low escaped, Mumper and dozens of others were arrested and tried for piracy. After a lengthy sermon from Rev. Mather, more than 25 of them were hanged in what would be the largest mass execution in Rhode Island history. Mumper, however, was among just eight to be found not guilty.

Capt. Ben Pease of Edgartown, probably a distant cousin to the unfortunate Capt. Samuel Pease, would by the 1800s become one of the most notorious pirates and slavers in the Pacific Ocean, a ruthless villain whose misdeeds would inspire books and movies more than a century later.

And Eastville, an unsettled wilderness when Capt. Pound visited, would become an isolated settlement nicknamed the “Barbary Coast.” The harborside community was known not for piracy, exactly, but for their reputation for smuggling and for their extravagantly aggressive profiteering on salvage rights when unfortunate mariners wrecked their vessels on the shoals off East Chop.

After returning to England, Captain Pound landed a second career in the Royal Navy, eventually retiring as a respected country gentleman. In 1691, barely a year after he won his freedom, he published a map of New England based on his travels, which included the first practical chart of Boston Harbor. The “Pound Chart” as it was known, became the go-to map of the Boston waterfront among mariners for the next seven decades. The depiction of his old piracy grounds near the Vineyard, however, is notably lacking in the chart. In place of navigable details, at the approximate spot of his capture, he just drew a sly little squirrel. 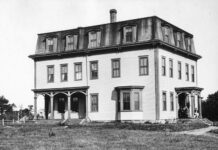