How do you bring dance to life in a museum exhibition, which is inherently made up of objects that don’t move? Exhibitions assistant Kate Logue skillfully animates the show by covering the walls with fabulous photographs of dancers in motion to tell the story in “Let’s Dance! 50 Years of the Yard,” at the Martha’s Vineyard Museum. In addition, their costumes, 16 film clips from 1976 to 1994 in media consoles, and stenciled silhouettes of performers dancing across the upper walls of the gallery bring vibrancy to the story of a beloved performing arts institution on the Island. It began in 1973 with the idea and desire of one woman, the choreographer Patricia N. Nanon, to establish a colony in the heart of Chilmark’s natural beauty that would provide them with the time and space to create and showcase their work. Nanon, who died in 2008, envisioned the Yard as “a playground without walls, a place to explore, to experiment, construct … a space in which to come together and to be alone.”

“Let’s Dance” tells the evolution of the Yard from its itinerant infancy to the present day, in its 50th summer of performances. An exhibition label relates that during its first summer, dancers and audience members alike shared space with the hay in David Flanders’ barn, and environmental pieces were presented at sites around the Island. But only a decade later, with a growing reputation in the dance community and on the Island, the Yard settled into its permanent home just outside of Chilmark’s town center. The campus has a performance space, open-air studio, administrative offices, and also houses for the artists-in-residence who stay for anywhere from a week to three weeks to focus on new work; teach community, senior, adult, family, and school classes; and perform for the public.

The exhibition pulls largely from the Patricia N. Nanon collection’s many thousands of photographs, video, and audio recordings, and archival documents donated in 2015 by her three daughters. Logue culled through, starting the process without a preset plan. After gaining a sense of what was there and doing some of her own research, including reading old newspaper articles and the publication the Yard produced for its 20th anniversary, Logue selected the most interesting photographs, and made sure to cover the stretch of time and different types of performances. When she included physical objects like costumes, Logue chose images related to the performances in which they were used. She says, “I was trying to create touch points, so you could see the connections. Then, since I scanned many more photos than I could use, I made them into the flip books, to get as many visuals as possible.” Each is rich with photographic history, as well as information and great related quotes, which, again, bring the show to life.

Logue conveys different aspects of the Yard’s evolution, starting with what it was like in the beginning, and Nanon’s impetus in establishing the Yard. She also delves into the physical details of its permanent home: for instance, how the old barn was turned into a rehearsal and performing space replete with dressing rooms and a shop area to construct sets, and a lighting and sound booth. You get the sense of the communal feel of a dance residency when learning that the three houses on the property had 11 bedrooms that could sleep up to 15 people, easily handling both the Yard’s summer staff and the companies.

We also discover how the Yard residency goes beyond providing rehearsal and performance space, technical support, stipends, and a place to stay — but also, as the label says, “home-cooked meals, a Lucy Vincent Beach pass, sunset picnics at Menemsha, trips downtown to go dancing, and deck birthday parties all ensure resident artists have a Martha’s Vineyard summer, not just a productive work residency.”

Logue hopes that visitors will come away with “an understanding that Chilmark has this gem that’s been here for 50 years, and how it embraced the Island, and the Island embraced it back.”

Yvonne Mendez, program director at the Yard, shares that one of the ways they are really engaging deeply with the community of late is multiyear residencies. These include one with the Urban Bush Women, who have been coming to the Island the past two years and connecting both with the African American community as well as the Aquinnah Wampanoag tribe to help inform their new and multi-site-specific piece to be performed next year, which is profoundly informed by various ancestral legacies. Another multiyear project is Danza Orgánica, which also has been working with the Aquinnah Wampanoag tribe, which, in this instance, has helped develop the piece as well as perform in it. Mendez says, “These residencies are more immersive, going full circle back around to how Patricia would have events all over the Island and in different kinds of spaces, like we are doing in collaborations with the museum, Slough Farm, and Featherstone.”

Logue said that what she learned from putting the show together was “what was core to the Yard was supporting the creative process and artists who decided they wanted to pursue this hard field. They weren’t established yet, and were trying to find their way. The Yard has really helped a lot of choreographers find their early footing. It was cool learning the role they have played in modern dance.” Through Oct. 21, you have a chance to learn how they have, and continue to do so.

“Let’s Dance! 50 Years of the Yard” will be on view through Oct. 21 at the Martha’s Vineyard Museum in Vineyard Haven. For more information, see mvmuseum.org. For more about the Yard, see dancetheyard.org. 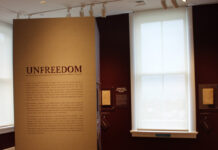 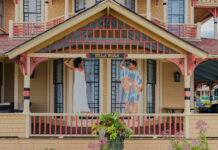 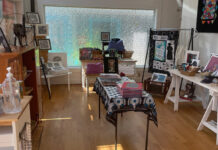