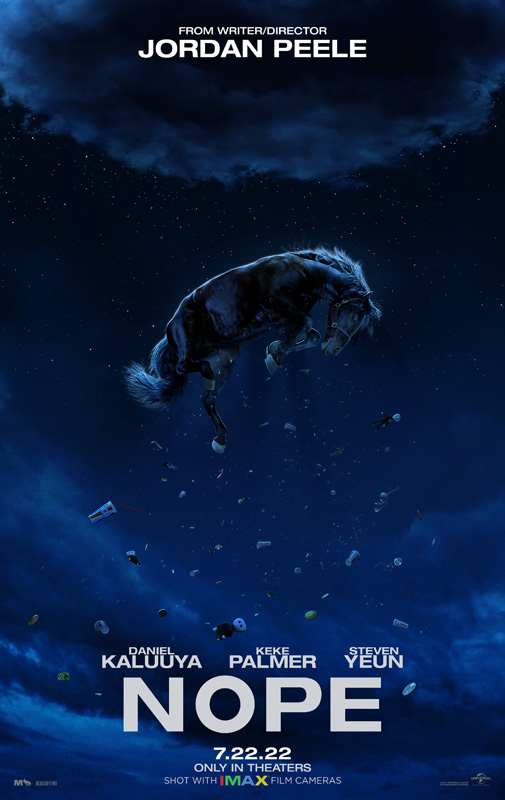 “Nope” plays at the M.V. Film Center on Thursday, August 25. Written, directed, and produced by Jordan Peele, this nutty film describes the sci-fi/horror happenings at a ranch in an isolated California town.

“Nope,” however, begins in 1998 on the set for production of the sitcom “Gordy’s Home.” Reacting to the pop of a balloon, the usually domesticated chimpanzee who stars as Gordy goes wild and attacks several of the show’s actors. But the littlest one, Ricky (“Jupe”) Park, hides under a table and survives with help from a strangely levitating sneaker. After the animal calms down, Jupe makes eye contact with the chimp, and they give each other a fist bump.

The film moves to the present day, and to ranch owner Otis Haywood Sr., who trains horses for film and television productions. Haywood Sr. is suddenly and mysteriously killed by a nickel in the eye that plummets from the sky.

His son Otis Jr. (O.J., played by Daniel Kuulya) and daughter Emerald (Em, played by Keke Palmer) inherit the ranch, and work to keep it afloat. Em heads to Hollywood, while her brother claims he’s the ancestor of Eadweard Muybridge’s Black jockey in his “Animal Locomotion” series. Six months later, O.J. is filming a commercial with prominent cinematographer Antler Holst (Michael Wincott), when one of O.J.’s horses freaks out, causing mayhem. As a result, O.J. is fired.

Close to bankruptcy and trying to survive, he begins to sell off his horses to Jupiter’s Claim, a nearby theme park run by a now-adult Jupe (Steven Yuen). Then disturbing happenings begin to take over, causing the electricity at the farm to shift on and off, and a number of the remaining horses to disappear strangely. O.J. discovers an unidentified flying object (UFO) in the sky, which has been seizing and devouring the missing horses. This is also what caused Haywood Sr.’s death.

Em returns and helps O.J. enlist cinematographer Angel Torres (Brandon Perea) to set up surveillance cameras, but he’s unable to get clear photos because of the electrical interference caused by the UFO. Torres observes a stationery cloud, dubbed “Jean Jacket,” and deduces this must be the UFO’s hiding place.

As the title of the film, “Nope,” is meant to explain how an audience reacts to things that frighten them. The film follows this crazy sci-fi/horror tale up and down to the eventual outcome of O.J. and Em. Critics have described it as an example of the use of cinematic spectacle, which viewers will indeed become fixated on if they’re to enjoy it.

Information and tickets for “Nope”are available at mvfilmsociety.com. For information about films playing at Edgartown Cinemas, visit entertainmentcinemas.com/locations/edgartown.