Penelope Curtiss Pease (“Penny”) died peacefully at home in Harthaven in Oak Bluffs on August 1, 2022, at the age of 98. 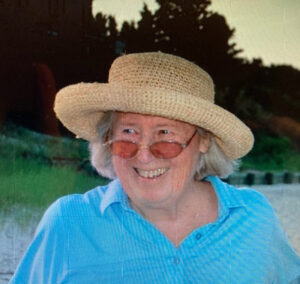 She was born on Dec. 16, 1923 in New Britain, Conn., to Mary Curtiss Pease and Herbert Hoyt Pease. Penny was the fifth of five children. Penny attended Mooreland Hill School in Kensington, Conn., the White Mountain School in New Hampshire, and during the last years of WWII, she attended Ethel Walker School to be closer to home.

Penny married Marshall Adams Pease in New Britain, Conn., on September 11, 1948. Penny raised four children while her husband was constantly on the road selling hardware for Stanley Works. She was active in community affairs. She volunteered for numerous local organizations, was very active in local politics, and was a deacon and Sunday school teacher at First Church of Christ Congregational in New Britain for many years. Penny and Marshall (“Marsh”) led an active social life with numerous close friends.

Penny was a determined, feisty, and pragmatic child of the Depression. Ever frugal, she saved rubber bands and tinfoil, made clothes for family members, stained the house herself, mowed the back field, and held the fort while Marsh was on the road.

She was an avid skier, hiker, camper, and sailor. In her teens at school in New Hampshire she was often climbing snowy mountains with her skis on her shoulder, to enjoy Tuckerman Ravine and Cannon Mountain. She loved nature and all that it offered. Bird and moon watching were some of her favorite pastimes.

She was also an accomplished gardener, and loved being on or in the water, most often in Harthaven and Chilmark. She was a supportive and encouraging spirit who always saw the best in people, and brought out the best in her children. She was a generous mother to “strays,” always offering a meal or bed. She was fiercely independent and opinionated, but never had an unkind word. Penny loved to knit amazing sweaters, and sew clothing and Halloween costumes. At Christmastime she and Marsh took the kids caroling in the neighborhood, even if she “could never carry a tune.”

In the 1980s, after the children were “well launched,” Penny managed the books at Marsh’s company, Pease Industrial Products. Penny enjoyed a 40-year marriage with Marsh, who died in 1988 at age 69. After Marsh died, she managed the company for a short time until she retired.

Penny left Kensington in 2001 and moved to Carleton-Willard retirement community in Bedford to be closer to her children. In 2020, she moved to her summer home in Harthaven on Martha’s Vineyard to be in the company and care of her three children, their dogs, and the local bird population.

Penny is survived by her three children, Peter A. Pease (Susan), Douglas M. Pease (Richie), and Mary (“Polly”) S. Pease (Craig). She also leaves nine grandchildren and three great-grandchildren. In addition to her husband, she was predeceased by her son Malcolm C. Pease, and laid to rest beside them in the Maple Cemetery in Berlin, Conn.

A memorial service will be held on Saturday, Oct. 1, at 2 pm at First Congregational Church of West Tisbury. A reception for attendees will be held in Harthaven following the service. Memorial donations can be made to either First Congregational Church of West Tisbury, to First Parish in Lincoln, to White Mountain School, or to Hospice of Martha’s Vineyard. To share a memory or offer condolences, visit the website of Chapman Funeral Home at chapmanfuneral.com.