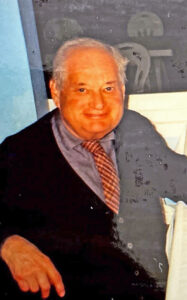 Born in Manhattan to Julius and Hessie Forman Goldman, Minton attended DeWitt Clinton High School in New York City. He went to the College of William and Mary, where he majored in history. At graduation, he was recognized as a Fulbright scholar, the only one that year in the state of Virginia. On that scholarship, he attended Northwestern University for a master’s degree in political science, and tThe Fletcher School of Law and Diplomacy for a master’s degree in law and diplomacy, and a Ph.D.

Minton taught at Wheaton College, and subsequently at Northeastern University for 40 years, where he was a full professor. On retirement he became professor emeritus. During his tenure at Northeastern, he earned numerous awards for publications, and a Certificate of Excellence in Teaching. In addition to his many scholarly articles and book chapters, Professor Goldman published books: Slovakia Since Independence: A Struggle for Democracy; Revolution and Change in Central and Eastern Europe; Russia, the Eurasian Republics and Central and Eastern Europe (11 editions), and Rivalry in Eurasia: Russia, the United States, and the War on Terror.

Minton’s great love was teaching both undergraduate and graduate students. Students responded with respect and admiration, often sending him thoughtful letters about their classroom experiences. Known as a demanding but caring professor, he had an amazing depth of knowledge that he presented in a carefully organized manner. He sent students on their way with a sense of accomplishment and pride in the “impact and importance of your teaching, especially when applied to real-life circumstances.” As one student wrote after some classes with him: “I am now able to pursue my life goals, and having a great time doing so.”

Minton married Maureen O’Donnell in June 1962, and their daughter Joyce was born in September 1966. Their life in Needham was a busy and happy one. Minton was the cook, and eating early, Joyce would sit at the kitchen counter chatting away while her dad prepared a late meal for Maureen and himself once the day’s work was done. Summertime often meant travel, frequently to areas of Minton’s academic interest, such as the former Soviet Union and Eastern Europe. Summer also meant time on Martha’s Vineyard — biking, swimming, and having good meals with family and friends.

For all his academic seriousness, Minton had a playful side. He built a model railroad in the basement, kept a close eye on all things Mickey Mouse and Donald Duck, and collected miniature cars and other memorabilia from his travels. He also loved a good discussion, and engaged colleagues and compatriots from all over the globe in analyzing the state of the world. A subscriber to the Boston Symphony beginning in his graduate school years, Minton was a music buff, and built an impressive collection of classical albums, playing them at full volume, so they filled the house with music.

Minton leaves behind his loving wife, Maureen, and her sister Kathleen; daughter Joyce and her husband Marshall and their three children, Julia, Laura, and Sarah. As Sarah would say of her Grampy Minty, “We miss you already.”

Services and the interment will be at the New Westside Cemetery in Edgartown, and will be private.