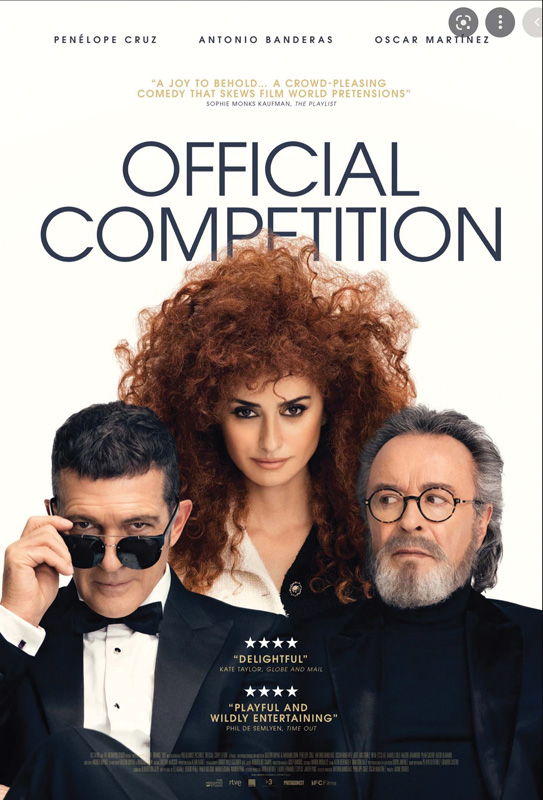 “Official Competition” happily returns to the M.V. Film Center on Saturday, Sept. 17, and Sunday, Sept. 18. This satirical Spanish comedy played initially at the International Film Festival on Sept. 11, and if you missed it then, it’s worth seeing it this time. Directed by Argentinians Gastón Duprat and Mariano Cohn, it stars Penélope Cruz, Antonio Banderas, and Oscar Martinez.

Martinez plays the 80-year-old pharmaceutical tycoon Don Humberto Suárez, who decides he wants to make a bridge — or a movie — to be remembered by. That’s the first ridiculous joke — a bridge versus a film. He’s rejected the following comical items: a ceramic dog, a clown painting, a gun, and a massage chair, and decides to go with the film.

In a send-up of the Hollywood industry, he hires arrogant, bossy, and wild-haired Penélope Cruz as Lola, the director for the film. Banderas plays the egomaniacal star Félix, and Martinez is Iván the aging, self-confident thespian. When the three sit under a disturbingly suspended giant rock, the joke becomes apparent when it turns out to be made of papier-mâché, and is carried off, clearly not a real rock. Interestingly enough, while both Banderas and Cruz have starred in films by celebrated director Pedro Almadóvar, they haven’t really worked together before this film.

Iván pretends to despise Hollywood at the same time he rehearses his Oscar acceptance speech. So much for being anti-Hollywood. Lola decides to adapt to the screen “Rivalry,” a successful novel whose author has won a Nobel Prize. As in this novel about two competing brothers, Félix, with his Lamborghini and fancy girlfriends, and Iván loathe each other from the get-go.

In a cavernous and elegant hall, Lola begins nine days of rehearsals, which grow more and more ridiculous as the nature of Hollywood creativity and actors’ egos are skewered. For example, Lola makes Iván repeat his opening line, “Good evening,” over and over again, to his growing and laughable frustration.

In Félix’s case, she requires that he portray a scene of drunkenness: He’s in on a scale of three out of 10, then five, and finally a scale of six-and-a-half out of 10. After the rock episode, she wraps them together in plastic, while destroying their prize icons.

Lola performs an absurd round of floss dancing in her bedroom, and then there’s the crazy effort of listening into a vacuum hose, as well as to two leaf blowers. An episode with Iván and his wife has them decide the hammering next door is actually part of a round of experimental music. What makes these absurd episodes about Hollywood and its actors convincing and successful is the acting of Cruz, Banderas, and Martinez.

Information and tickets for “Official Competition” are available at mvfilmsociety.com. 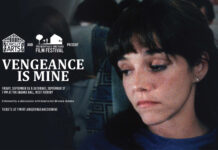