“This was real life. Oh my God, this was made in the olden days.”

“Look at this fossil. Excellent!”

Fossil enthusiasts and rock hounds of all ages attended this year’s National Fossil Day celebration at the Union Chapel in Oak Bluffs last Saturday, Sept. 10. The annual event, sponsored by the Oak Bluffs library and the Marine Paleobiological Research Institute (MPRI), was celebrated a month earlier than last year, and in a new venue.

The venue easily accommodated the hundreds of adults and children who stepped into the well-ventilated, spacious but not cavernous room. Over a dozen tables topped with hands-on exhibits of geologic treasures attended by experts were set up on the perimeter.

attendees. One offered a chance to make a fossil void. The other had pictures of dinosaurs to color, which were a huge hit with the kids who proudly shared their pictures. The apatosaurus was favored by many.

Bart Jarek’s exhibit of magnetic soil was another delight for children and adults. Many folks tried to pull or pry the spiky shapes free from the magnet. The ironsand reminded this reporter of the hair on the top of a puppet’s head. Bart is a local avocational geologist, and his impressive display lined the stage.

Another crowd favorite was prehistorian Duncan Caldwell’s “two gigantic bones” from a stegadon. A stegadon, an extinct relative of the elephant, garnered much interest. The bones were found beside the Solo River in Java, where the Dutch scientist Eugène Dubois discovered the first Homo erectus fossils in 1893. Caldwell is an avid seeker of rock art in caves, and this past spring found two new paintings in a cave in France. They have been named La Grotte des Blaireau Vignoble de Marthe — the Cave of the Martha’s Vineyard Badgers.

MPRI executive director and paleontologist Fred Hotchkiss displayed many fossils of the familiar, such as a horseshoe crab, and the less familiar — the inner ear bone of a whale.

Some of the kids’ favorites were, unsurprisingly, a sea scorpion, coprolite (fossilized poop), baby horseshoe crabs, and bakelites — a fossilized shell that looks like a walking stick.

Charles Shabica’s display included a 12,000-year-old bison bone with a spear point embedded in it. This was a hands-on exhibit, so attendees were encouraged to slide out the point and then fit it back in. “It must have taken a lot of strength to throw a spear hard enough to pierce such a large bone,” said one young enthusiast. Shabica’s T-Rex claw also drew admiration. He offered kids fossilized shark teeth they could take home.

The Belain brothers, Vineyard locals, found out more about their beach finds. Their fossil shark tooth and clam were between 16 and 30 million years old, and their sharp-edged rock had been carved into an ancient tool, a hide scraper.

Overheard at another table: “Is it real? It is real! But it’s still mine?”

Dr. Robin Kolnicki of Framingham State University explained how “geology is a life force.” She studies the earliest fossils, Protozoa microbe fossils. She had a piece of meteorite, and explained that a very recent study, published in April 2022, found that meteorites contain all of the elements that make up DNA, RNA, and amino acids necessary for life.

It’s true we really are one big family made of stardust. 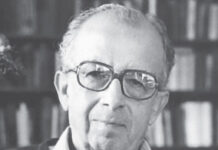