The Ashley Medowski Gallery on Lamberts Cove Road in West Tisbury is a special place, one well worth visiting. It might be said that the property where it’s located is an extension of her gallery. Along the driveway are three pieces of old farming machinery. Near the building that houses the gallery an old bicycle leans on a fence. Around the garden are old boat motors. The gallery itself was once the barn of her great-grandfather, Capt. Norman Benson, and Medowski sawed out three windows to bring in the light. Many of the objects that belonged to him have since become objects of art.

Medowski has renovated the interior of the barn into three levels. “The restored gallery was a way to bring nature inside,” she said in an interview last week. On the ground floor is a traditional gallery displaying her latest work, which includes driftwood pieces and sculptures made of found objects. Two of the found objects suspended on the wall are “Fisherman” and “Fisherwoman,” and each consists of fishing lures and are made to hang as a puppet. Every part of them has a history that is the result of Medowski’s research: from the driftwood or paintbrush-handle torso and fish hooks for hands and feet to the vivid yellow head and copper hat that tops them off.

The driftwood sculpture titled “Saw-Whet Owl” includes an explanation of how it was made: “Whittled, carved + pinned with hand painted cat-eyes.” The magic comes from the artist discovering the shape and matching it to the creature it becomes, with eyes that give it power. “Driftwood Shark” has a row of bright white porcelain beads for teeth that contrast with the wood that is described as “assembled with pegs and pins and sanded pale blue cat-eye.” “Driftwood Hummingbird” consists of a porcupine quill found by Medowski in Tanzania, as well as the bobble from a sandal on the bird’s beak. “Driftwood Woman” is a shapely nude made entirely of found driftwood.

The three-dimensional paintings found here include “Menemsha Galley” with its handmade frame from salvaged wood. The awning and sign in this acrylic painting are among those parts that seem to spring out at the viewer with a life of their own. “This was a fun piece,” she says. Another is of Humphrey’s in West Tisbury, which is no longer there. With this painting, people can enjoy a part of the Island’s past, Medowski points out. “I try to honor the beauty I find there,” she says.

Next follow the stairs, with its balusters made of driftwood, to the second level, which houses Medowski’s workshop. Before this multi-talented artist morphed into driftwood sculpture, she made sea glass jewelry. A handsome, multi-colored mosaic that she thought for a while might make a swing seat, sat on her second-floor work table.

Overhead on the way to the third floor is a chandelier hung from a pulley and rigging that belonged to Medowski’s great-grandfather. This level is best described as a viewing room, since the walls display her finished art, and the space has also become the site for objects she’s working on. It is a place where visitors can see what that work entails or enjoy finished pieces as well as the view out the window of James Pond. A sea glass bracelet that has been commissioned lies on a table, ready to be completed. The driftwood pieces for a heron are lined up, also ready to be finished, and the bird’s eye had an earlier life as a piece of jewelry.

Many of Medowski’s works already display the red dots that mean they’ve been sold. The many buyers who commissioned them also have let her keep them on display for the summer, but there are plenty left to buy. 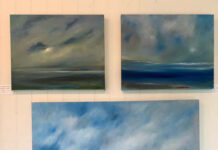 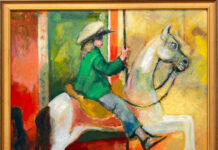 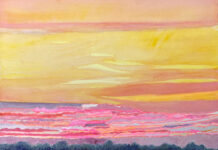 Artist Eleanor Hubbard was ‘marking time’ during the pandemic

A proud moment for Chilmark