With the sun climbing into the sky, children anglers and their guardians gathered on Sunday morning at Oak Bluffs pier for the annual Kids Derby. This event is hosted by the Martha’s Vineyard Striped Bass and Bluefish Derby.

“It was a perfect morning with some good fishing and lots of smiling faces,” Derby committee member Joe El-Deiry said.

Derby president John Custer wrote about the significance of the Kids Derby online.

“Today is Kids Day, a special event for many families. It was a day that Ed Jerome [former Derby president] looked forward to each year. Ed passed away four years ago, on Sept. 18,” Custer wrote Sunday on the Derby website. “Today we think of him, and celebrate Kids Day as an appropriate way to remember and honor him. Ed spent his career in education working on behalf of children, and he loved introducing kids to fishing and the Derby. We miss Ed, but are comforted by his enduring legacy, as well as the signs of his influence all around us, especially during the Derby, and particularly on Kids Day.”

El-Deiry said those at the Kids Derby “certainly felt [Jerome’s] presence at the Oak Bluffs wharf.”

The grand overall winner was Jax Trott, who caught a 32-inch striped bass. Harper Gilkes won the largest scup category by fishing up a 14.25-inch scup.

Carrie Fyler, Weston’s mother, told The Times there was a “slight mishap” where the fourth-place winner was announced instead of him, but it was “cleared up immediately by the M.V. Derby folks,” who were “very apologetic to Weston” afterward. “He is very proud of his catch!” Fyler said

Cooper Gilkes, owner of Coop’s Bait & Tackle in Edgartown and the one who supplied the results to The Times, said the Kids Derby turned out great. “Wouldn’t miss it for the world,” he said.

There were also a variety of giveaways for attendees, such as T shirts, gift certificates to Mad Martha’s Ice Cream, dehooking tools donated by Martha Rose Fisheries, and more.

“The smiles on the kids’ faces are what reminds us of the importance of Kids Day to the next generation of anglers,” El-Deiry said. 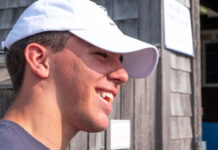