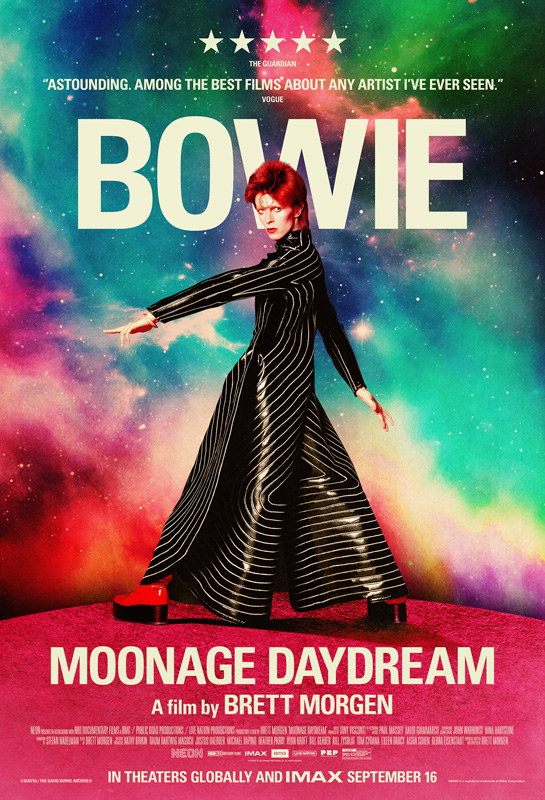 “Moonage Daydream” arrives at the M.V. Film Center on Friday, Sept. 30. Directed by Brett Morgan, this documentary is a dizzying plunge into the life of the late, legendary singer/songwriter David Bowie, born David Robert Jones. It will probably be best enjoyed by Bowie fans who already know a lot about their hero.

The winner of 10 platinum albums, Bowie was one of the best-selling musicians of all time. Rolling Stone ranked him among the greatest artists in history. He died of liver cancer in 2016. His No. 1 hits include the single “Ashes to Ashes,” the album “Scary Monsters (and Super Creeps)” and his collaboration with Queen in “Under Pressure.” Even if this documentary is not a conventional narration, it’s worth viewing.

“Moonage Daydream” (the title comes from the song of the same name) does not rely on talking heads. It begins with a Bowie phrase from Friedrich Nietzche: “God was dead and man had killed him.” After a star-filled image and what looks like a moonscape, the viewer sees a girl with a tail approaching a space helmet with a skull inside, followed by a skeleton floating toward a globe. It’s the kind of image Bowie enjoyed promoting. A collage of film images includes crowds attending a Bowie concert. In one of the few voice-overs that are not of Bowie himself, the commentator asks who Bowie is, and at last, the viewer gets a glimpse of Bowie in costume and, eventually of him singing.

Most of the voice-over is commentary from Bowie himself, and many scenes in the film have not been seen or heard before. The film uses Bowie’s words: “I’m a collector, I collect ideas.” His spiritual beliefs range from Buddha to Nietzsche, and he states that he has “a very strong belief in a force.” In addition to his music, the film describes him as an accomplished artist.

Bowie describes himself as having “an ordinary childhood” in an oppressive suburbia, with a passion to escape. His half-brother Terry Burns, about 10 years his senior, had an important influence on him, introducing him to “outside things” that were missing otherwise from his family and childhood. From Burns he learned about Kerouac and Coltrane, before this half-brother developed schizophrenia and was institutionalized.

In his discussion of mental illness, Bowie expressed a fear of how it was also in his family. Images of Bowie are interspersed with his commentary. “I sense a feeling of loneliness in my work,” he says, and “I wanted to invent a new musical language.”

Much of the film unites his voice-over commentary with his music and performance, as well as his adoring crowds. Bowie describes his time in Berlin, although not his temporary penchant for Nazism. He calls himself “an old-fashioned beatnik.” He rarely talks about his relationship with his first wife, Angie Bowie, although the film does include his second wife, the Somali supermodel Iman, whom he was devoted to and with whom he had a daughter, Lexi Jones. With its unprecedented access to the Bowie archives, “Moonage Daydream” provides plenty of new material about the legendary David Bowie. For that reason, it is worth viewing.

For tickets and more information about films playing at the M.V. Film Center, visit mvfilmsociety.com. For information about movies screening at Edgartown Cinemas, visit entertainmentcinemas.com/locations/edgartown.