I have been a member of Cleaveland House Poets for 16 years, and therefore head to Cleaveland House on the Edgartown–West Tisbury Road biweekly (except during the pandemic). I began wondering about the property across the road as I watched it transform, albeit from a distance. My curiosity got the best of me, and I had to meet the gardener who was behind this ongoing transformation. It turned out to be Martha Halperin.

When Martha and Peter Halperin first lived in the house on the back lot of the property, the front was pasture and deer; that was back in 1992, when they were seasonal residents. Then they managed four years full-time, and had to leave in 1998. Their kids attended the West Tisbury School, Falmouth Academy, and M.V. Regional High School. Martha says, “One summer I grew salad greens with Roxanne Kapitan.” I ended up speaking with Roxanne, and learned she never imagined the scale Martha had for that first garden. The two of them would pitchfork truckfuls, 110 trips or more, of manure. Roxanne deeply values their relationship of “encouragement and swapping ideas.” She credits Martha with nurturing her “aptitude, fortitude, and motivation” to begin her own career. Because they did not continue as partners, Roxanne moved on to what is now Native Earth Teaching Farm.

Growing up, with Martha’s dad in the Navy, her family moved regularly, but she managed to make a garden everywhere they lived, first with her mother, then on her own. “I really got into horticulture in a big way after I graduated from college,” Martha says. “In my first job, at the Scott Arboretum at Swarthmore College [her alma mater], the whole campus is really an arboretum. I was a horticulture intern; I put tags on all the trees and shrubs, I tended the greenhouse, which belonged to the biology department. And then I spent a couple of afternoons a week with this elderly gentleman, Dr. John Wister, 91 [the first director of the arboretum], and his wife, 70-something [formerly the assistant director]. I was introduced to the world of public gardens, botanic gardens, arboretums, and that’s when I first heard of Polly Hill. I thought since I married a doctor, we would be in one place, but we ended up moving around Boston, New York.” Martha did garden at each location, and like her work at the arboretum, she focused mostly on “woody plants and shrubs.”

The first place she lived with her husband when he was at medical school in New York was Riverdale, and Martha got a job at Wave Hill for three or four years. After med school, they moved to Jamaica Plain, where Martha tried to get a job at the Arnold Arboretum, but did not succeed, and says, “That was kind of the end of my horticulture career. Then I had our babies and I planted.” After a brief stint on-Island they moved to Huntington, Long Island, where they lived for 12 years, followed by a decade in Northampton.

In Huntington, they lived in an historic house that took most of Martha’s attention, so gardening was limited to being ornamental. In the midst of this period, they sold the back lot of their West Tisbury property, and in 2004 built the house on the front lot. They added solar three years ago. Between coming and going, she did not have time to focus on her Island garden. I asked how they first came to the Island, and Martha said, “In 1986, we visited some friends who rented a place in Katama. After that we rented in places like Otis Bassett,” and they just wanted to keep coming back. The garden started with “plantings around the house, steppingstones, and a couple of trees here and there.” Martha started a packet of lavender seeds, “so that became [her] border, and it’s been very happy.” They’re right on the road, so Martha thought planting apple trees as a border for the road would help, only to realize how slow-growing they are.

She had never grown vegetables until the pandemic, when they were no longer “coming and going.” Last year, after deciding to “do vegetables,” Martha realized she could use all the space between the trees, creating beds and extending the circles originally planted around the apple trees, so all are now connected. Some of what’s growing include crepe myrtle, echinacea, bearded iris, chives, ornamental allium, cucumbers (“hit hard by the deer”), incredible zucchini, potatoes, onions, garlic, and peppers. Martha wasn’t too happy with the nasturtium she was growing. After six years, the apple trees still have a long way to go, Martha adds: “They also suffered from deer and cedar-apple rust.” Cedar-apple rust affects apple tree health, causing premature defoliation and reducing fruit quality (learn more at bit.ly/FactsCedarRust.

As we keep walking around past sunflowers, Martha points out where the deer ate her beans. She points out all the apple trees; there’s one that died, and she planted a peach tree in its stead, and there’s another peach tree. On my first visit, a large red maple tree was delivered that Martha was planting on the pasture side of their home, to provide some shade and color. When I comment about her peppers, Martha says, “I really got into purple.” Some peppers were just beginning to turn yellow. I loved her multicolor peppers, and a variety of mini-peppers. Morning glory was growing close by. One thing I missed was her pink celery, which she enjoyed in cocktails. They’re skinnier, with “a really nice flavor, and just beautiful — from Baker Creek Heirloom Seeds.”

Martha says, “I got purple and pink radishes, peppers, and tomatoes. What’s really doing well is the eggplant.” What got Martha started to look for purple was “a particular pickle [that] originates from Kyoto, Japan” that she remembers from visiting Japan with her parents. A recipe she found includes myoga ginger, something she’s now growing, but has not yet flowered. She continues, “The other ingredient that makes it really purplish is shiso, in the mint family. It comes in green and a blue-red color.” Although Martha had none, Roxanne Kapitan had plenty, and brought her some, allowing her to start her pickles two days earlier.

As we walk on, Martha comments, “My onions were very successful, I think my potatoes are successful.” She has small gray-green melons, a French variety I was not familiar with called ‘Petit Gris de Rennes.’ Then there was “a whole row of purple asparagus,” and we walk by chives and iris before Martha points out the artichoke she started in planters, a first for her. She’s got plenty of honeynuts coming in, a butternut squash variety, but smaller. Then there’s a plentiful bed of raspberries, she has three kinds of red and a yellow one. We pass her kousa dogwood, boxwoods, and pie cherries. She has a Japanese black pine, a dwarf tree.

At one time her property had a few horses, so Martha appreciates how great the soil is, even though it’s “sandy, but not super-sandy.” Martha used a kit to add a greenhouse last March. It opens from both ends, uses polycarbonate for the windows, has a pop-up on top, has a built-in sprayer from both the top and sides, manufactured by Riverstone Industries, made in the U.S. The greenhouse is set between her husband’s music studio and the road, creating more privacy from the road as well. She has bamboo in containers that was not happy being in the path of the wind. She explains, “I’m really interested in building bamboo fences and growing the raw materials.” She has plenty of both red and yellow onions besides leeks growing. Martha had read about a container technique for leeks that uses a can (both ends cut) around the base. She says, “You build them up to create a big long shank.” The deer had been enjoying her cherry tomatoes, something she hopes won’t happen once a fence is in place.

In the last bed we walk by, there are potatoes including “russet, purple flesh, a Yukon gold type — a German butterball, and at the bottom are pink and purple skin with a white flesh.” Another experiment is her purple sprouting broccoli, “which is supposed to be overwintered and blooms the next spring. I planted it really early hoping it would be fooled, but it wasn’t fooled.” She’ll put them in the greenhouse for the winter, and hopes she’ll be planting them next year.

Martha’s garden is nothing short of miraculous. Her dedication, curiosity, and joy are clearly evident. I am grateful she allowed me to learn about her garden, and know it will only become more fruitful and interesting as each season passes. 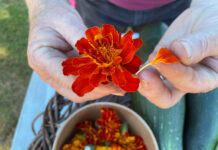 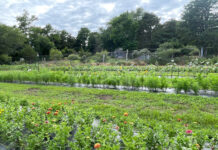 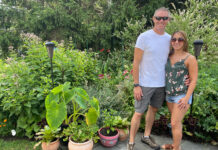