The bleached-white tree trunks worn smooth by wind and water over the many years sprouted up from the otherwise green carpet of forest on either side of the trail.

The eerie beauty of the dead trees, the feel of a cemetery in the woods, was one part of a blustery fall day’s mountain biking exploration into the woods of West Tisbury.

I set out from my home in Vineyard Haven in the windy late morning of a Saturday to meet my friend Ray. Summer had changed to fall the previous week, and the day was cool. Ray and I had discussed exploring the backwoods of West Tisbury for some time. Today was the day.

Ray has introduced me to many of the trails that I bike regularly in the State Forest. I will never forget the first time we went out. I was bringing up the rear in a group of three.

We were going down a steep trail. I went into a turn. The turn was tighter than I expected and I was going too fast. I went off the side of the trail into the brush. I struggled to bring the bike back on the trail. A tree loomed up before me. I did not have time. I was going to hit. I braced myself.

Soon I was toppling over the handlebars. I landed safely on the trail with a thud. The only bruise was to my ego.

I turned the pedals through my neighborhood. My breathing is always hard when I start out. My lungs seem in need of more air. My legs object to what I am doing. I keep going. Soon I turn onto Skiff Avenue. I stand up on the steep hill. I spin the wheels of my bike. I begin to settle down.

About a half-mile into my ride this morning, I realized my water bottle with a replenishing Nunn tablet was sitting on my kitchen counter. On a hot summer day, I would have turned back. Water is more than paramount in the heat. On a cool fall day as it was, I decided I would just be thirsty.

Ray was waiting for me at the roundabout.

We headed along the Barnes Road bike path until we came to the airport fencing. We crossed the road there, and biked a firelane in the State Forest. We chatted about kayaking — the different paddles and boats.

After a few turns and a few different firelanes, we came out on the bike path along the West Tisbury Road. We crossed over the road. Traffic whirred by. We biked the shoulder toward Edgartown.

We arrived at a parking lot with access to the State Forest. There were a number of trails to choose from. We took the most obvious one in the middle.

The trail was fun. Brush swiped us on either side. The ground was smooth. One could not see really what was ahead, as the overgrown trail went on a continuous turn. We went at a good pace.

In no time, we were back to the parking lot. We had done a short loop. We looked around again, and decided this time on a trail to the side. We set out.

This was a different sort of trail. Short shrubs and plants and little saplings grew up on the trail. Woods were on either side. The trail turned from trail to more of an old, unused driveway, back to trail.

We biked through the section of forest with the bleached white tree trunks. The branches long ago had fallen off, and the trunks were broken at their tops. They were numerous and spaced. What caused their demise? A fire? A hurricane? Disease?

We kept on. Some sections of trail were littered with small tree stumps. They came out of nowhere. Often I did not notice them until my tire ran into them. I was glad to be on a mountain bike. They were just a sharp bump on my big tires.

We had no real sense of where we were, so we just went where the trails took us. We went along a wide sweep of meadow. This marvelous scenery was hidden away to anyone but outdoor folks such as ourselves.

Numerous times we had to redirect because we came across trail closures posted by the Department of Conservation and Recreation. We lamented the loss of these wonderful trails.

We stopped for a short break. Ray had brought some Kind bars. I would have liked a sip of water.

It is a nice feeling to be in the woods, away from the traffic on the roads, and away from people. Surprisingly, one does not often run into other folks when biking in the State Forest. All one has is the trail before him and the peacefulness of the woods.

After an hour or so of wandering, we came back to the West Tisbury Road. We crossed near a development called Bold Meadow. We made our way back into a familiar section of forest.

The old faithful Doctor Fisher trail brought us much of the way home. Soon we came out onto the field behind the high school varsity baseball diamond, also the home of the M.V. Sharks.

We biked the paved road back to the entrance to the high school. We split there, each headed home. I went left on the Edgartown Road, and Ray took a right.

I biked past the high school and crossed Airport Road at the roundabout. I coasted down the hill to Head of the Pond Road. And then with some momentum, I started back up. The momentum did not last long.

Soon I was working my way on the steep hill. I stood on the pedals. I shifted into a lower, easier gear. My legs burned. Each turn took more effort than my legs wanted. Not enough oxygen flowed to my brain. I did not stop.

I looked forward to the flattening of the incline by the Eversource campus. It was not too far ahead. I have biked the hill many times before, at the end of long rides. I would be there soon.

Finally I was there. I passed the power plant. The bike path leveled for a stretch.

I biked another set of revolutions, standing up for the show of it, and then I sat back in the saddle. I let the bike coast and caught my breath. I turned the pedals slowly. The burn faded from my tired legs. I savored the respite.

I was tired, but not ready to be home. I felt the euphoria of a good ride. I just wanted to enjoy the last few miles. I clicked back into a higher gear. 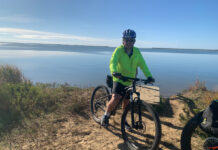 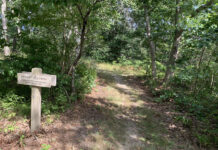 On My Way: To the fair 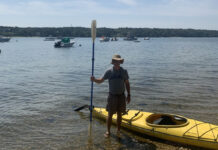 On My Way: Adventure on the water