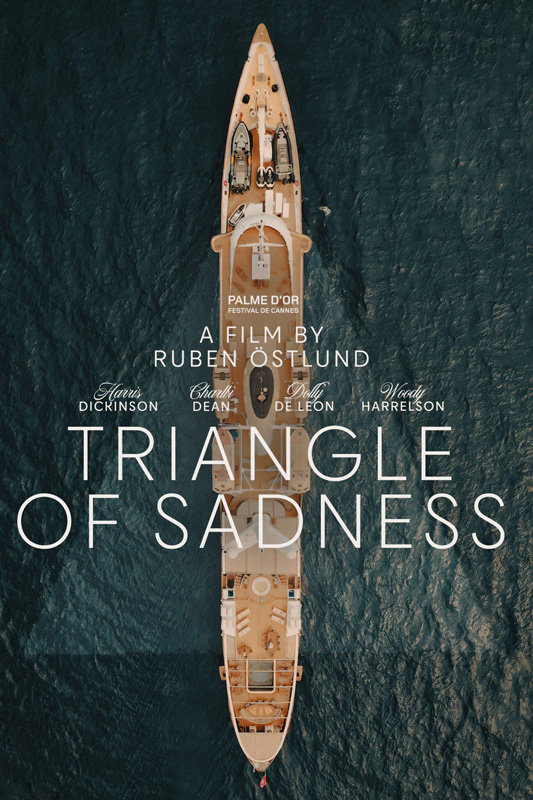 “Triangle of Sadness” comes to the M.V. Film Center on Thursday, Nov. 3. Directed by Ruben Öslund, this Cannes Palme d’Or winner is a black comedy about the filthy rich. “Triangle of sadness” refers to the patch of skin between the eyebrows, often manipulated by models to express or suppress emotion.

The film opens with a gang of bare-chested male models who illustrate the triangle of sadness and the way models are treated as objects. Viewers next see one of them, Carl (Harris Dickinson), having dinner with his model girlfriend Yaya (Charibi Dean). They squabble over who will pay the check when Yaya, who is more successful, ignores it.

The couple lands on a luxury ship with a lot of wealthy passengers, including Woody Harrelson as the drunken Capt. Thomas Smith; Dolly deLeon as Abigail, one of the ship’s housekeepers; and Zlatko Buric as the oligarch Dmitry. The captain and Dmitry absurdly trade their views on Lenin and Stalin, socialism and capitalism. Crew member Paula (Vicki Berlin) illustrates how the staff struggle to satisfy the passengers.

The viewer is also introduced to other members of the ship’s excessively rich company: the couple who made their fortune in grenades; the magnate who insists he sells “shit” (fertilizer); the woman who complains about the dirty sails on a ship with none; a shy software genius animated by two attractive women; a woman who insists that members of the crew go swimming; and, last but not least, the stroke victim named Therese, left with only one phrase, “In den Wolken” (“in the clouds”).

As these super-rich folks enjoy dinner with the less-than-enthusiastic captain, a storm brews, rocking the ship and causing seasickness. Spoiled food also contributes to plenty of projectile vomiting. Once the ship sinks from an explosion, a group of passengers and crew end up on a deserted island. Among them are Carl, Yaya, Dimitry, Therese, and Abigail, as well as a few others. In a role reversal, Abigail takes charge, making a fire and catching fish. In yet another comical episode, Therese is confronted by a beach vendor who ignores her once he realizes she can’t really talk and doesn’t have any money.

By now, Carl and Yaya end up going their separate ways, and Carl takes up with Abigail. The survivors are ridiculously reduced to eating pretzel sticks. Yaya and Abigail decide to hike to the other side of the island, and discover a resort there. Realizing she’ll have to go back to her lowly position, Abigail takes action.

“Triangle of Sadness” skewers the wealthy in ways the viewers will enjoy, if occasionally this awardwinning film extends the satire a bit too long.

Information and tickets are available to “Triangle of Sadness” at mvfilmsociety.com. For information about movies playing at Edgartown Cinemas, visit yourneighborhoodtheatre.com/edgartown-cinema-2.