Steven C. Jordan, Sr. passed away unexpectedly, on November 11, 2022. He was born December 11, 1954, in Portland Maine, the son of Edward F. and Collette W. Jordan. Steven graduated from Dover-Sherborn High, Class of 1972. After graduation, he attended the University of Rhode Island, where he pursued and achieved a master’s degree in pharmacy. 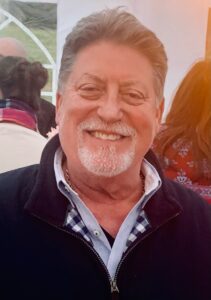 Though he didn’t continue on practicing pharmacy, he continued to renew his license annually, which hangs in Vineyard Scripts today. After graduating from URI in 1977, Steven decided to follow in his father’s footsteps and pursue a career selling insurance for New York Life, which he excelled in astonishingly. He was the very epitome of what every salesman aspired to be. He started selling with New York Life, at the mere age of 24 years old, and over time, he was continuously a member of The Million Dollar Round Table. He never stopped working, right up until the moments he left us.

Growing up, Steven summered on Martha’s Vineyard at his family’s cottage in Katama. He loved the Vineyard and spent his summers working nights unloading trucks at the A&P. When he wasn’t working, he spent his days enjoying all of the beauty the island had to offer, including the love of his life, Kathleen S. Jordan, whom he met on the island many years later, where they settled down and raised their family. They celebrated 30 years of marriage this past June. Together, they built a wonderful life with their four beautiful children whom he leaves behind. Jennifer and husband Ian Wilford of South Berwick, ME; Collette K. Jordan of Edgartown, MA; Philip E. Jordan of Rangeley, ME; and Steven C. Jordan, Jr. of Edgartown, MA. Steven’s family were his pride and joy. He spent every day working harder than most, in order to make sure they were healthy, happy and provided for.

Not only did he love his family, Steven also loved his Island community. He gave back to the Town of Edgartown by serving on the Financial Advisory Committee for over 20 years. As well as beautifying his neighborhood, by spearheading and running the Sandy Valley Road Association, as their president, for 30 years. Steven loved the outdoors. More specifically, he loved Rangeley, Maine, where his mother was born and raised and his roots date back to the late 1700’s. He moved his family to Rangeley every summer, where in turn, they fell in love with the mountains and one day laid their own roots, by building their dream home. Together, they filled their home with joy, love, laughter and most of all, entertainment. Steven and Kathleen were known to host outstanding get togethers and dinner parties, but his greatest speciality was his Seven Fishes, Christmas Eve spread, that he presented with the greatest pride. He was a cooking extraordinaire, which landed him as a Chili Champion for twenty years straight. When not in his own home, Steven was a dynamic guest at any party. His energy and spirit filled a room in a way that overpowered anything negative. His sense of humor, along with his mixture of charm and charisma, accompanied by his quick wit, was an absolute show stopper. It didn’t matter who you were, or what kind of day you were having, when Steve Jordan was around, everything was better, no matter the situation or circumstances. While in Rangeley, Steven spent his free time on his tractor, or in his barn, plotting his take down of the next Big Buck that was to cross his path. He was an avid outdoorsman. He lived for the hunt. Whether it be hunting the land with his buddies on Island and in Maine, or big game fishing; the man was an all star when it came to the sport. Aside from his family and friends, there was nothing that he loved more. From deer to noose, duck to pheasant, stripers to sharks; you name it, the man achieved it. He loved a good trophy, but his pride is what shined the brightest. Steven was a staple in both of the communities he resided in on Martha’s Vineyard and in Rangeley. He was the glue to the entirety of the empire that he spent his life building and will be deeply and sorely missed by all. In addition to his parents, Steven was predeceased by his beloved brother, Philip. Surviving, in addition to his wife and children, are his sisters, Joleen and Wilford Rose of Franklin, MA, Kimberly and Ken Reeves of Naples, FL, his younger brother, Edward and Melissa Jordan, of Dover, MA, and his Aunt and Uncle, Bob and Dolly Huff, of Cape Elizabeth, ME, accompanied by many loving nieces, nephews, cousins and very dear friends that he held so very closely to his heart. Family and friends are invited to gather for Visiting Hours on Tuesday, November 15, from 5 to 7 pm, at Chapman Funerals & Cremations in Oak Bluffs. His Funeral Mass will be held on the following Wednesday, November 16, 11 am, at St. Elizabeth’s Church in Edgartown. Burial date is pending.