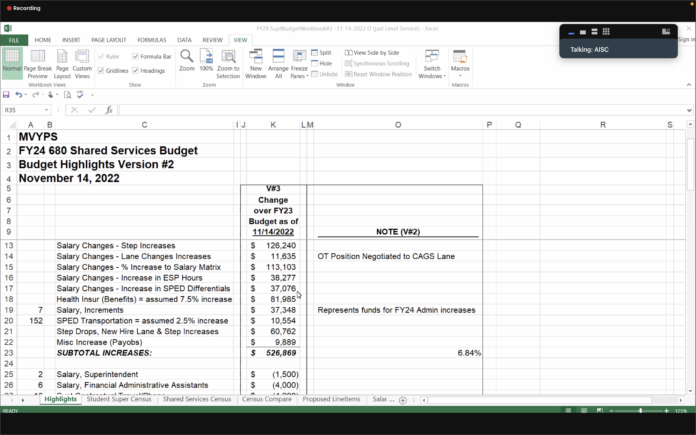 Members of the All-Island School Committee went over the Islandwide shared services budget for FY24 at Wednesday’s meeting, but will gather more information before finalizing and approving it at a follow-up meeting.

According to school business administrator, Mark Friedman, one earlier version of the shared services budget that was distributed to school committee members represents an essentially level service budget, with no changes to programs, and no substantive decrease to line items.

“You see the subtotal of the estimated effects of the collective bargaining increases and a couple other items,” Friedman explained. “The majority of this budget is salaries — we had salary changes which represent step increases.” He continued to say that pretty much every employee involved in a shared service receives a step increase, amounting to a significant increase of approximately $126,000.

Additionally, obligatory percentage increases to salaries (sometimes called Cost of Living Adjustments) will warrant an increase of $113,000 for the next fiscal year. Teachers, teaching assistants, and administrative support personnel will receive salary increases. “We have no custodial personnel or food service workers in this budget,” Friedman explained.

Friedman and the school financial team have put in a placeholder of 7.5 percent to reflect the anticipated increase in health insurance premiums from the Cape Cod Municipal Health Group. “We don’t actually know exactly what the premium increase will be. They probably won’t know that until sometime in late January or February,” Friedman said.

In total, the earlier version of the budget contained about $526,000 in estimated increases, bringing the overall percentage increase to about 6.7 percent. Friedman reiterated that this reflects no change in staffing or elements of the school system that would directly affect students. “This budget is really being driven by collective bargaining,” Friedman said.

Friedman added that any budget cuts or decreases in expense lines are restricted to only administrative lines. He noted a significant reduction in research and development expenditures, and a cost savings for not replacing tech equipment and instead doing the minimal levels of maintenance. Islandwide staff development is being reduced by $20,000 to mitigate the budget increase. External enrichment activities such as English Language Learner workshops and school business administrator workshops will be cut down significantly. All told, Friedman said he was able to reduce expenditures by almost $80,000. “None of those things that were trimmed have a direct effect on students,” Friedman reiterated.

School officials are proposing an additional Project Headway teacher position at the same time as proposing a special education shared services Education Support Professional position reduction. That would bring the budget down by about $44,000. “This is as low as we can go without really jeopardizing being able to do our work,” Friedman said.

After school officials were done going through the third iteration of the budget and about $141,000 of cost reductions, the overall percentage increase dropped to about 6 percent. “It’s still a significant increase, but that’s where we stand,” Friedman said.

A number of committee members said they weren’t comfortable voting on the most recent version of the budget, and wanted more time to digest the new changes. A meeting was scheduled for discussion and a vote on Monday, Nov. 28, at 5 pm.