Nights now draw in early and we come indoors, appreciating warmth and light. Winds and rains have torn away much of the colorful autumn foliage of swamp maple and beetlebung at their moment of glory; however beech woods’ chartreuse, amber, and copper linger on, in their last vivid hurrah before winter, as do the russet tones of many oaks.

Grasses come into their own too; their dynamic response to wind adds motion and excitement to the garden and landscape, such as the little bluestem pictured at Nat’s Farm. The pink muhly grass (Muhlenbergia capillaris) in several client gardens is beyond beautiful; in the wind it is bewitching, a shape-shifting cloud of pink smoke!

The Island has had recent generous rainfall, which is a boon to the water table and new landscape plantings. Nonetheless, we are still in drought conditions. See mvtimes.com/2022/11/16/islands-still-face-significant-drought. Today I transplanted a small Monterey cedar in a garden with deep soil and good conditions. To four inches down, all was humus-y and moist; below that, bone dry.

Trees Are the Answer

Scuffling through fallen leaves has an everlasting appeal. The sounds and scents transport me to childhood and walking the half-mile out to the school bus stop at the Merry’s milk table. This structure was where the milk cans were picked up and returned by the MV Co-op dairy truck.

We might sit on it if early for the bus; or jump on and off into the fallen leaves of the venerable large oak that shaded it. It is a very different Vineyard now: Co-op dairy, milk table, venerable oak — all gone; and few children walk to and from school or bus stops.

In grade school geography, we learned about ancient Greece, how it was once a forested land flowing with milk and honey. It became deforested, rocky and arid, which it largely remains to the present day, due to the historical overgrazing by flocks of sheep and goats.

One of the things trees do for us is induce the sky to make our rain. No rain and no trees are what distinguish deserts. When trees and forests are wantonly destroyed the globe’s carbon/water cycles are deranged, which is what we are witnessing, as more and more of Earth’s surface, including the American Midwest, is in the process of desertification.

To bring this back to the local Vineyard level: we lack regulations that force the sky to make rain for us, but that is what trees do! Halting the destruction of global forests, despite how critical this is, is not under Islanders’ control. However, destruction and clearing of the Vineyard’s forest cover is, and we can be far more mindful and protective of it.

Island development is causing significant tree and woodland loss, while Island potable water usage is increasing exponentially. We lack requirements to replace trees that are removed. We even lack toilet regulations to discourage flushing 1.6 gallons of potable water that becomes 1.6 gallons of sewage-contaminated water.

In your Vineyard lifestyle, please think. Stop and weigh your habits and attitudes. The same applies in your mainland gardens, too. Actions of each of us do matter — on a finite Vineyard Island of one hundred square miles, or on a finite earth Island.

Ask yourself: Is what I’m doing good gardening? Or is it lookism?

Unbeknownst to the property owner and the aboveground world, the fallen biomass around trees creates humus and encourages fungal and bacterial organisms  — microbial life — whose presence is integral to the health of trees and the soil they grow in. It is past time to forgo the ritual leaf blowing and removal of this important asset, only then to have it replaced by purchased mulch. Trees actually prefer their own litter!

Meet the rhizosphere en.wikipedia.org/wiki/Rhizosphere, the zone where plants absorb water and nutrients. It is the soil directly in contact with plant roots and how plants communicate with it on a molecular level. It is also where they release compounds that can control the activity of the organisms in the soil. Plants and microbes communicate in the rhizosphere and can help each other out. In a sweeping generalization, the rhizosphere is what supports life, trees and all, on earth.

Trees produce flows of water vapor that are typically more than 10 times greater than from herbaceous vegetation per unit of land area, surpassing those produced by wet ground or open water. Transpiration “is an active biological process” that is not fully reflected in the climate data that are presented to us in the nightly news’ “climate-change” bytes.

One response of low-nutrient soil, or of being robbed of nutrients, is to grow a crop of moss or sandplain plants. Mosses are small, undemanding plant organisms that require very little, apart from surface moisture, to grow and cover soils. Typical sandplain vegetation consists of plants such as huckleberry, bayberry, native rose thickets, grasses, and sedges, with low nutrient requirements, all growing in what is essentially just sand, which is what Martha’s Vineyard is — a sandpile out at sea.

A large black oak was taken down in our garden last spring, its bole revealing heart rot. The gap in the canopy left by this enormous (by Vineyard standards) forest tree opened up a bewildering array of possibilities for something ornamental but smaller, acid-loving, woodland adapted, and garden worthy. Neighboring plants included azaleas, disanthus, amelanchier, hollies, boxwood, magnolia, mahonia, and rhododendron, any one of which would have filled the spot nicely. However, the replacement I always had in the back of my mind was a willowleaf lindera, Lindera angustifolia. It seems happy, making good growth, and now lighting up that spot in a show of beautiful colors.

Nights now draw in early and we come indoors, appreciating warmth and light. It is something to be thankful for, with the realization that many here and abroad lack the most basic human needs, due to weather, war, want, or lack of water. 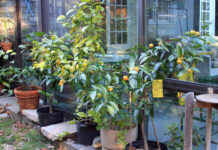 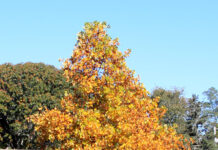 Garden Notes: Moving through the fall 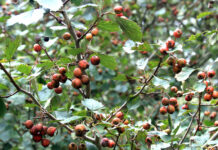 Garden Notes: The signs of the season