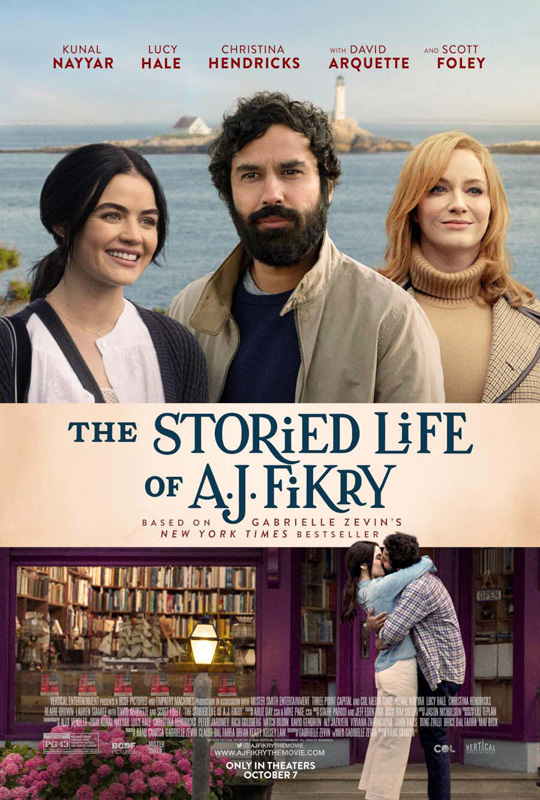 “The Storied Life of A.J. Fikry” comes to the M.V. Film Center on Friday, Dec. 2. Based on the bestselling 2014 novel of the same name by Gabrielle Zevin, it is adapted and directed by Hans Canosa. It is the fourth collaboration between Zevin and Canosa, and was filmed in Hyannis. Although “storied” usually means celebrated, in this case it’s simply a reference to Fikry’s life and career.

This movie tells the story of the unhappy, grumpy bookstore owner, played by Kunal Nayyar {“The Big Bang Theory”), who’s hostile to his potential customers as well as disliking books and reading, thanks to his wife’s tragic death. One day, after Fikry closes his financially deteriorating bookstore on the fictional Alice Island near Cape Cod and heads back into his quarters for a meal, he ends up throwing his plate of food at the wall. His unhappiness also causes him to drink himself into oblivion to sleep at night. He hates his job, and then discovers that the prized, valuable book of Edgar Allen Poe’s poetry he had hoped to retire on, “Tamerlane,” has been stolen from its locked glass case. In the meantime, he goes for runs, eventually collapsing. The doctor he sees warns him that he’s headed for death.

Fikry remains irascible, at least until Maya, a little girl abandoned in his bookstore (played by Charlotte Thanh Theresin, then Jordyn McIntosh, and Blaire Brown as she grows up), comes into his life. A few days with her turns into a somewhat permanent stay.

Along with Maya arrives Amelia (Lucy Hale), a publisher’s rep from Providence who happens to love books. She becomes interested in Fikry’s bookstore, and spends time there. She also peddles a memoir, “Late Bloomer,” about author Leon Friedman (Joe Penczak), who lost his wife, but Fikry will have no part of it.

Fikry contacts the police about both the stolen book and the toddler left inside his store. Somewhat eccentric Officer Lambiase (David Arquette) arrives to investigate. Then a mysterious package arrives at Fikry’s store. His sister-in-law Ismay (Christina Hendricks) is married to Fikry’s best friend, novelist Daniel (Scott Foley), and they come into the picture to help, providing information about Maya’s paternity. Fikry invites Friedman to speak, an appearance that inspires Amelia to return for the author’s reading.

Fikry gradually begins to open up, especially since he begins to find Amelia attractive.

Amelia’s and Fikry’s on-again, off-again romance is a dance that carries the film to its conclusion, but not before the multi-character plot with lots of literary references unfolds further.

Information and tickets for “The Storied Life of A.J. Fikry” are available at mvfilmsociety.com. For information about films playing at Edgartown Cinemas, visit yourneighborhoodtheatre.com/edgartown-cinema-2.