St. Andrew’s Episcopal Church in Edgartown welcomed musician and organist Charles Rus to the parish community back in July, in the middle of an Island summer. He had only visited once before, earlier in May, when he came to lead the music on invitation from the pastor, the Rev. Chip Seadale. “I think I’ve landed in a place where I can stay for a while,” Rus said on the phone over the weekend.

He has outstanding musical experience, including 10 years as organ teacher, both collegiate and preparatory divisions, at the San Francisco Conservatory of Music. Add to that list years of recording, composing, performing, organbuilding, and even a Fulbright scholarship. Judging by my enjoyable conversation with him, Rus also has the gift of being able to laugh easily and often. We talked not long after he arrived back at his apartment near St. Andrew’s after going to the Island Community Chorus holiday concert on Sunday. He’s working on getting out and about and developing a real appreciation for his new home, although he got a strong taste of the close-knit community when the migrant emergency happened a few months ago.

“When the refugees came, I was trying to volunteer, and within hours there was nothing to do because so many people were completely faithful and just came through,” Rus said. The church community, in fact much of the Island community, wanted them to stay but, he said, the Island just didn’t have the services they needed at the time. “They called Chip when they got to Community Services and asked ‘Can you take some of them?’ He said, ‘No, we can take them all,’ and that cemented my love of the church here. It brought me right back to Corpus Christi, and I thought, with a priest and congregation like that, I can stay here.”

We had a lengthy conversation about Rus’ time in Rochester, N.Y., working as organist and choir director at Corpus Christi Roman Catholic Church with Father Jim Callan from 1981 to 1989. I told him I had worked for the Syracuse diocese for 15 years, and had heard all about Callan from neighboring Rochester. He was — and still is — considered a radical priest for his ministry with those suffering from AIDS, for allowing people who were not Catholic to receive communion, and for allowing women at the altar during liturgies. After a 1999 Vatican crackdown where the church leaders were all fired, from the ashes of Corpus Christi Church rose a new congregation, Spiritus Christi, or Spirit of Christ. It became an independent Catholic church led by the Rev. Mary Ramerman, as well as Callan. Ramerman was ordained in a historic ordination at the Eastman Theater in Rochester, attended by 3,000 people. The congregation is still there, with Callan as an associate pastor and a new pastor, the Rev. Myra Brown.

Rus explained that his experience at Corpus Christi with Father Callan really reinforced his own faith. He had asked Callan if he would pray for those dying from AIDS back in the 1980s, and Callan said he’d pray about it. In the end, Corpus Christi was the only church in the area that would do a funeral for someone gay who died from AIDS. “After a couple years, they had a meeting one evening, and he said, We’ve become well-known as being a good place to die from if you have AIDS,” Rus remembers, “and he said, ‘I think we need to become a place to live from,’ and the church skyrocketed in membership.”

The congregation practiced all the things in the Gospel of Matthew — clothe the naked, feed the hungry, visit the sick and those in prison. “Thursday night folk Mass was packed with people and the weekend was the same way. Callan wasn’t radical overall, he was just filled with compassion,” Rus said.

We had a great chat about our previous lives in the Catholic Church, and hope to meet sometime. Meanwhile, Rus is about to start as accompanist with a choir that one of his friends from church, soprano and high school teacher Jessica Sanseverino, is starting up. Rus was recently confirmed in the Episcopal faith, with the Rev. Seadale serving as his sponsor. “We get along really well. He’s a good guy, very down-to-earth,” Rus says of Seadale.

Looks like he’s found a new home and a new faith community. Welcome! 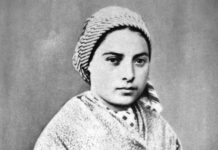 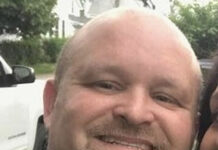