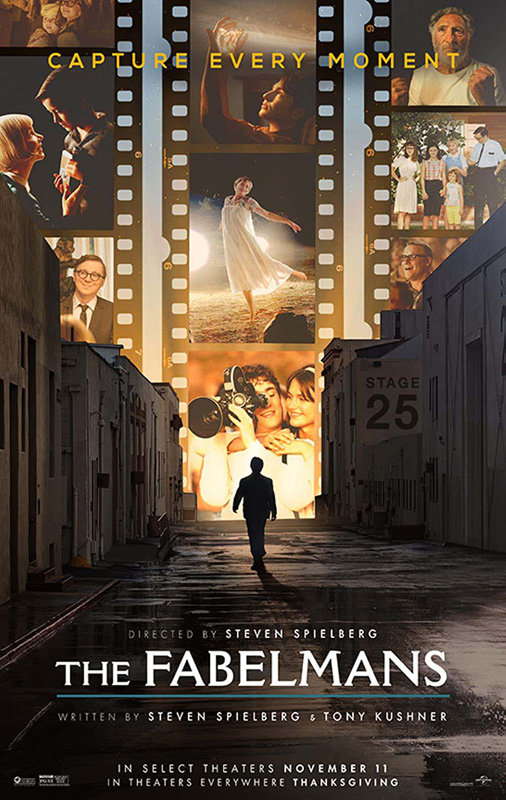 “The Fabelmans” plays at the M.V. Film Center on Friday, Dec. 16. Written and produced by Tony Kushner and Steven Spielberg, it’s Spielberg’s tribute to his family, as well as to the movies.

This People’s Choice Award film begins with young Sammy (Gabriel LaBelle) getting taken to his first movie, Cecil DeMille’s “The Greatest Show on Earth,” with his parents. Dedicated to the memory of his real-life parents, Arnold Spielberg and Leah Adler, it begins his passion and obsession with the movies.

His father Burt (Paul Dano) gets a new job, sending the family to Phoenix, Ariz., with Burt’s best friend and business partner Bennie (Seth Rogen). Sammy’s best supporter is his blonde charmer of a mother Mitzi (Michelle Williams). As a teenager, Sammy continues making movies, this time with his Boy Scout troop.

After Mitzi’s mother dies, Burt encourages Sammy to make a film to cheer up his mother, using editing equipment he has given him. But Burt dismisses Sammy’s passion for filmmaking as nothing more than a hobby.

Mitzi’s Uncle Boris (Judd Hirsch) comes for a visit and encourages Sammy to continue making movies as an art form. When Sammy makes a movie about the camping trip, he catches Mizi on film in a liaison with Bennie. He confronts his mother with her attraction to Bennie, and a fight ensues and Mitzi hits Sammy on the back. Upset, Sammy shows Mitzi the film evidence of Mitzi and Bennie, but promises not to reveal it.

When Burt receives another promotion, the family moves to Northern California. Bennie, hoping to keep the marriage of his best friend intact, stays behind in Arizona. Mitzi finds herself missing Bennie. In the meantime, Sammy is confronted with anti-Semitic abuse, but manages to date a devoutly Catholic Monica (Chloe East). His romance with Monica encourages him to suppress his Jewish roots, especially after Monica lets him borrow her dad’s 16mm camera.

By now, Mitzi’s affair with Bennie leads to her divorce from Burt. While the rest of the family moves back to Arizona with Mitzi, Sammy stays with his dad and Monica. Smitten, he asks Monica to move to L.A. after high school with him. But Monica, unwilling to leave behind her faith, breaks up with him instead. A heartbroken Sammy screens his film about Senior Skip Day to cheers from his high school classmates. In a conversation with Sammy, Mitzi encourages her son to continue his commitment to filmmaking.

Sammy moves to Los Angeles with his dad, but finds it close to impossible to find a filmmaking job, until a CBS executive offers him work on the TV series “Hogan’s Heroes.” Recognizing Sammy’s genuine interest in moviemaking, the executive invites him to meet a gruff John Ford (David Lynch).

In “The Fabelmans,” Spielberg recounts the story of his early inspiration and development in filmmaking. The film may seem a little superficial at times, but the insights into the Spielberg family make this film an enjoyable look at the life of a popular filmmaker.

Information and tickets to “The Fabelmans” are available at mvfilmsociety.com.