We don’t go to McDonald’s often, but it’s not a bad option for breakfast. I would typically get a biscuit with egg and cheese. Occasionally I would add either bacon or sausage — just don’t tell my doctor, because I’m supposed to be cutting back on sodium.

My wife always ordered something called a McGriddle. For those unfamiliar, that’s an egg and cheese breakfast sandwich (you can add bacon or sausage, too) with pancakes as the bread.

That didn’t sound particularly appealing to me, but one morning, she convinced me to take a bite. Now I’m obsessed.

As readers of this page know, I like to cook and experiment, and I love my new Blackstone flat grill. (No, I don’t get paid by Blackstone for endorsing their fine product.)

On weekends, it’s not uncommon for me to cook breakfast, lunch, and dinner on it. So it was only a matter of time until I started cooking something similar to the McGriddle at home. Since I know that name is trademarked, let’s call my scrumptious breakfast sandwiches the BrenGriddles.

The cool thing about the Blackstone is that the company has many gadgets that make cooking things like pancakes and eggs simpler by using molds. As you’ll see in the photographs, they keep the pancake batter contained, and in sizes that are a perfect landing spot for a fried egg with melted cheese on top.

For the pancake batter, I use a riff on Bisquick. I follow the recipe on the back of the box for the most part, but I also add a dash of sugar, a teaspoon of vanilla extract, a tablespoon of vegetable oil, and the juice from half of a fresh-squeezed lemon. Once the mix is done, I pour the batter into the molds, and then drizzle maple syrup on top before flipping them over. Having the maple syrup flavor inside the pancake makes for a less messy meal.

While the pancakes are finishing up, I crack an egg into one of the round rings. I like my eggs medium and, let me tell you, it’s nearly impossible to get a fried egg cooked medium in a restaurant. They usually come out either too hard or on the runny side — and that’s not good with a breakfast sandwich like these. You can also scramble the eggs, if that’s your preference.

In the last few seconds of cooking the fried egg, throw the cheese of your choice on top and use a cover to melt it quickly, so the egg doesn’t overcook.

Bacon cooked on the Blackstone is better than in the oven. As a side benefit, it doesn’t stink up the inside of the house, and the grease doesn’t splatter all over the inside of the oven. Cooking bacon on a stovetop inside is not something I would ever do because it’s not worth the cleanup, even with a splatter cover, and the smell lingers like a March nor’easter.

I know I talk up the Blackstone because that’s the brand I have, but any flattop grill is worth the investment. It’s easy to clean. It’s outside. And you can make things like a BrenGriddle — two pancakes and a fried egg with cheese — in a matter of minutes.

To that I say, Batter up. 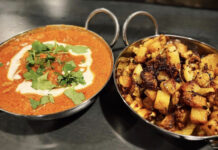