Alice Franklin Goyert died peacefully at home, surrounded by family, on Jan. 2, 2023, after a two-year battle with interstitial lung disease. She was 78. 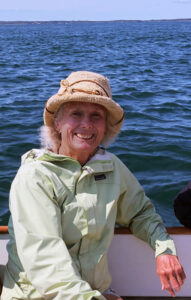 Born in New York City, she spent the first two years of her life with her mother and maternal grandparents in Montclair, N.J., while her father fought in World War II in the Pacific. She then moved to her ancestral 1749 working farmstead in Noroton, Conn., to a little red house on Nearwater Lane designed and built by her father. She grew up there, surrounded by aunts, uncles, cousins, parents, and siblings.

That same year, Alice joined the Blue Hill Troupe theater company as a set and prop designer, and met a handsome redhead with a beautiful baritone voice who became the love of her life. John Emmett Goyert Jr. and Alice were married in 1970 in Noroton.

Alice had trained and worked with TIAA-CREF as a COBOL computer programmer for two years before joining Union Carbide to design software that is still used today. She also worked for Olin Corp., leaving the workforce when she became pregnant, though her entrepreneurial spirit only grew. She oversaw construction of a Deck House, and developed her carpentry skills on what was the last piece of her father’s family farmland. She proved herself to be quite an adept handywoman. Johnny was born in 1974, and Wendy in 1975. During this time, she also co-founded a fresh flower catering business and the Darien Nature Center, which has been thriving ever since.

In 1980, the whole family moved to Latin America to live for eight years in Buenos Aires, Argentina; São Paulo, Brazil; and Mexico City, Mexico. Daughter Holly arrived in 1981, at a home birth in Buenos Aires. In Brazil, Alice co-founded a gem exporting business (A Certain Facet). While abroad, the family set up their U.S. home base near Alice’s retired father on Martha’s Vineyard.

Alice loved nature, and was constantly involved with it through her gardening, flower arranging, bird-feeding, reading, and of course weeding. Her botanical knowledge and crusade to defend native habitats culminated in her appointment to the Oak Bluffs conservation commission. As a year-round island resident, she donated many hours of service to multiple projects and causes: conducting archival research at the Martha’s Vineyard Museum, designing T shirts for the Net Result, preparing over 1,500 calligraphy birth announcements for the Martha’s Vineyard Hospital, and assembling perhaps as many Christmas wreaths as art director to her team at the Federated Church. At the Vineyard Haven Yacht Club, she launched the adult sailing program, managed the tennis program for many years, and served as commodore in 1997 and 1998.

Alice was an avid sportswoman. She played tennis from the age of 8, and was a college singles champion, which took her to the Junior Wightman Cup and to Forest Hills. She also enjoyed sailing and racing, and grew to love and compete in pickleball, rowing, and golf, scoring two holes in one at Farm Neck.

Alice loved her family above all. She was predeceased by her husband John, and is survived by her brothers Dick and Peter Franklin — pillars of strength and knowledge — and their families; children John, Wendy, and Holly, and their spouses; and her seven strapping grandsons and cherished granddaughter.