Artist David Wallis has a unique perspective on the Vineyard art world. On staff at the Granary Gallery in West Tisbury, Wallis has overseen a long-established Island institution that has represented hundreds of artists working in a variety of media.

Among the luminaries whose work can be found at the gallery housed in an iconic red barn are Alfred Eisenstadt and Thomas Hart Benton (both part-time Vineyarders). Hanging side by side with these legends of the art world, one can find work by both local and nationally recognized artists working today in a variety of media.

And for the past two decades, Wallis has gotten to know scores of artists represented by the gallery and the thousands of customers who walk through the barn doors every year. “Having worked there for over 25 years, I have had the opportunity to see a lot of work come through the gallery,” says Wallis. “I’ve had a unique perspective in hearing what people want and what people are drawn to. I have been inspired by watching the paths of other artists and gaining influence through their self-expression.”

Wallis had his first professional art show at the Granary Gallery in 1989. The Island had always been a second home for Wallis since his childhood, when he would spend summers visiting his grandfather in West Chop. Shortly after moving to the Island full-time in 1993, Wallis received a commission from Farm Neck Golf Course to create 15 original paintings for the facility. He has taught watercolor classes at the Featherstone Center for the Arts, and continues to show his watercolor work at the Granary.

More than anything, Wallis notes that his perspective on what artists are creating and what the public is open to has encouraged him to be constantly experimenting and reinventing himself as a painter.

Best known for his masterly watercolor paintings, Wallis is constantly experimenting and reinventing himself as a painter. Most recently, he has been working in oils, creating paintings that incorporate elements of abstraction. Although he does not consider his work true abstraction, his focus now is on color, form, and emotion. “I’ve been working more with a palette knife to broaden my brushstrokes and be suggestive,” says Wallis. “And my colors are not as you would see them in your mind’s eye. They’re more exaggerated.”

“I’m trying to be more painterly,” he explains. “I’m striving to bring more spontaneity and feeling to my paintings, and not just trying to give you exactly what you see. I want to have the viewer bring in some of their own creativity.”

Wallis’ style has gravitated quite a bit in a different direction from his early leanings. Originally trained as an illustrator, earning a BFA in commercial illustration from Syracuse University’s College of Visual and Performing Arts, Wallis became accustomed to focusing on purely representational art. “With my illustration background, my work tended to be more literal,” says Wallis. “My scenes were more recognizable, more location-specific.”

Now, with his most recent work, Wallis is moving beyond a purely representational viewpoint to show the Vineyard in a more imaginative, evocative way that demonstrates his passion and immersion in Island life.

A visit to the Granary Gallery will reveal this new direction in the West Tisbury-based artist’s work. The selection of Wallis’ oil paintings currently on view illustrate a range of styles — from images that are partially generalized in nature to others that are further simplified to focus primarily on form and color. His subjects are generally easily identifiable, though not naturalistic. As Wallis explains, “The colors that you see in nature — the blues of the skies and the greens — I will alter those to give you something different. Not so literal, more imaginative.”

Among those that combine elements of representational and abstract elements is an image titled “Sea Breeze” that shows a beach path with the surrounding tangled beachgrass shown in some detail to capture its tangled, delicate nature, while the sand, sea, and sky are executed in bounded planes of color that suggest layered colors and depth.

On the other end of the spectrum is a painting titled “On Deck.” Wallis explains that the image is a full abstraction of the deck of a Boston Whaler that was under repair in Menemsha. A study in textures and various shades of blue with one defining curved line, one would never guess that the image was representational in any way. “I loved all the cracks and textures,” says the artist, who notes that he spent a good deal of time at the Gannon and Benjamin boatyard, and often paints boats, especially in micro views of details.

For his oil paintings, Wallis employs an interesting technique — painting on aluminum panels, and often using a car bodywork spatula. “It’s a really nice surface for me to get aggressive with,” he says. “I can really scrape and scratch to get texture.”

“I’m not someone who takes the same approach over and over again,” says Wallis, who shares a West Tisbury studio with fellow artist Ken Vincent. “I very much want to learn and experiment. I’m always willing and wanting to try new techniques — not just stick to one.”

Elliott Bennett gets ‘Up Close and Personal’ 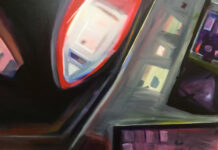