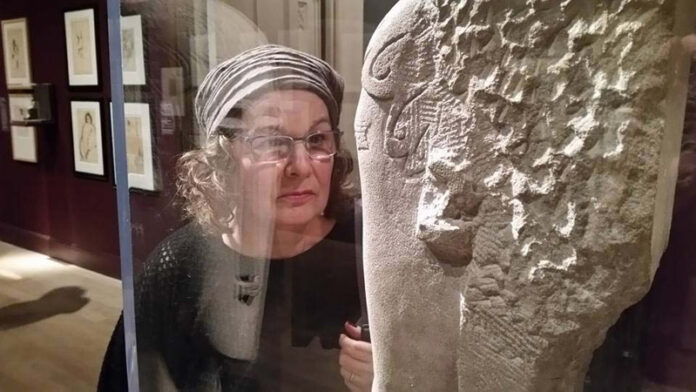 We’re in for a treat in the next couple of months, as art educator Janet Mandel presents her “Four Fabulous Women Artists You Probably Never Heard Of” art talk series, brought to us by the Chilmark and Vineyard Haven libraries.

Mandel taught in New Jersey’s public schools for 32 years, the last 18 of which were at Columbia High School in Maplewood, where she taught English and world languages and cultures — and, as it turns out, art history. Although growing up in a household where her mother took her to museums and had reproductions of famous paintings on the walls — and a sister who became an artist — Mandel didn’t study art history until she and her co-teacher pursued it because they felt it was something that would engage their students who had emotional challenges. Once introduced, though, Mandel quickly threw herself into it. Now retired, Mandel conducts illustrated in-person and Zoom talks on a variety of art history topics at schools, libraries, museums, senior centers, community centers, and similar venues; last year she held 141 presentations.

Mandel, who bills herself as an art educator, says, “One of the reasons I think my presentations have been very popular is that I’m not an art historian, and talk about something like this brushstroke or that, but basically, I tell a story about an artist’s life, about their works, an art movement, or time in history. I think that’s very accessible to people.”

Mandel chose four artists she believes are marvelous for the upcoming event. “I love all their art and introducing them,” Mandel says. “Artists speak to me when they are doing something new or different, that’s gone beyond what has been done in the past. This is what piques my curiosity.”

A perfect example is French painter Suzanne Valadon, whom Mandel will speak about on Wednesday, Jan. 18, at 6 pm. Valadon was the illegitimate daughter of a seamstress whose formal education ended at age 11. She worked as a circus acrobat and artists’ model, and gleaned what she could about painting by watching and listening to the men who put her image on canvas. Toulouse-Lautrec and Degas were her most important artistic influences. Under their tutelage she began to paint, and created powerful, unconventional images, principally of women. Although mostly unknown today, she is regarded by scholars as an important chronicler of women’s experiences. Her paintings remain fresh and modern, cementing her legacy as a significant figure in the history of art.

Next up, on Tuesday, Feb. 7, at 6 pm will be the enigmatic Florine Stettheimer. One of New York’s most unconventional painters, Stettheimer was a keen and opinionated observer of the people and the rapidly changing world around her. Her famous salon, attended by New York’s avant-garde during the 1920s through the early 1940s, was legendary. She prophetically chose to portray subjects considered controversial even today, such as race, sexual orientation, gender, and religion. For Mandel, it is time to recognize Stettheimer as one of the most significant artists of the 20th century, whose work remains as modern and relevant today as it was a century ago.

On Wednesday, March 22, at 6 pm is Augusta Savage, an important sculptor who overcame poverty, racism, and gender discrimination to become a luminary of the Harlem Renaissance. Savage’s art celebrated African American culture, and her work as an arts educator and political activist catalyzed social change. Mandel will explore Savage’s lasting legacy by examining her remarkable life and affecting works, as well as those of the younger artists she inspired.

The final talk on Wednesday, April 19, at 6 pm will be on the modern sculptor, educator, and arts activist Ruth Asawa, known for her extensive body of work, including paintings, printmaking, public commissions, and especially her wire sculptures, which challenge conventional notions of material and form. This artist, who was imprisoned in a Japanese internment camp during World War II, was a firm believer in the radical potential of arts education. She also devoted herself to expanding access to art-focused educational programs by co-founding the Alvarado Arts Workshop in 1968 and the first public arts high school in San Francisco in 1982.

Whether you come to one, some, or all, Mandel hopes that after watching, people feel, as she says, “that their lives have been enriched, and most importantly, they make you think.”

Email tthorpe@clamsnet.org or amcdonough@clamsnet.org to sign up and receive the Zoom invite. Free. Learn more about Mandel at jcmandel.wixsite.com/arttalks, and watch some of Mandel’s mini art talks on YouTube at youtube.com/@janetcohenmandel696.

Elliott Bennett gets ‘Up Close and Personal’