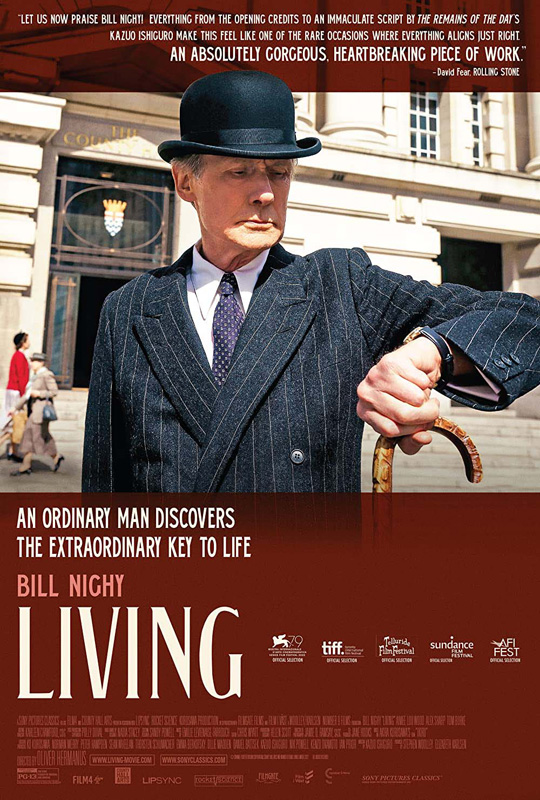 “Living” plays at the M.V. Film Center on Friday, Jan. 27. Bill Nighy stars as the frigid, long-time employee of the government’s Public Works Department. He plays Mr. Williams, who never smiles and always carries an umbrella. His colleagues also make up a rather bleak and grim 1950s world, but hang in there, this story improves when Williams learns he has terminal cancer. He wakes up and begins to come alive.

Directed by South African Oliver Hermanus and written by British novelist and Nobel Laureate Kazuo Ishiguro, it is based on the work of the celebrated Japanese filmmaker Akira Kurosawa, best known for “The Seven Samurai” and “Rashomon.” Viewers may know Ishiguro for his prize-winning novel, “The Remains of the Day.” Kurosawa’s 1952 film, “Ikiru,” provides the basis for “Living.”

Another asset to the film is the powerful and persuasive acting by Nighy as Mr. Williams. Early on in the film, the viewer sees Mr. Williams living with his son and daughter-in-law, who illustrate his lack of affect with their complaints about him. He’s a widower, and one hates to think what his marriage was like.

All that changes when he’s given a diagnosis of impending death. Then the viewer sees this zombie-like man begin to wake up and find himself exploring life. He goes carousing in bars and strip clubs, singing, believe it or not, with Mr. Sullivan, played by Tom Burke, a writer and barfly who befriends him. Then he takes up with Margaret Harris (Aimee Lou Wood), a bright fellow employee in the Public Works office where they both work. He takes her to lunch and a movie follows. She begins to think he’s hitting on her, until he explains that he admires her lively appetite for life and hopes to learn from it.

Mr. Williams has also taken to smiling at his other colleagues and even greeting them with a good morning. When his superior, Sir James, declines to support a petition by a group of women to fund a children’s playground, he appeals to his boss and wins him over. Before his fatal diagnosis, he had simply shuffled their request under a pile of other ignored projects. In the meantime, there are flashbacks of his life as a boy who played sports and was a soldier.

When the inevitable happens, the viewer attends his church funeral, complete with coffin and portrait — just to make no mistake about who it is. His colleagues discuss how he had changed for the better. An image follows of Mr. Williams on a swing at the children’s playground. A policeman arrives on the scene to question what’s going on, until one of Mr. Williams’s colleagues explains his role in providing for the playground.

As with its title, “Living” is a quiet, low-key film that the viewer will find grows with insight and appreciation. Part of the film’s success comes from its lack of sentimentality, especially owing to Nighy and his convincing performance. Another actor might not have been so successful as Mr. Williams.

Information and tickets for “Living” are available at mvfilmsociety.com. 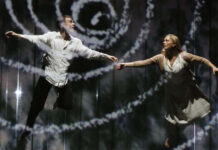 The Metropolitan Opera at the M.V. Film Center