Last Wednesday, there was a seance of sorts at the Martha’s Vineyard Playhouse Poetry Cafe in honor of Arnie Reisman and his newest posthumously published collection of poems, “Cages of Stages.” The medium for the seance was Arnie’s poems that were read aloud by members of the Cleaveland House Poets (of which I am one) and special friends.

Fan Ogilvie opened the evening to a standing-room-only crowd. As leader of the Cleaveland House Poets and one of the people who played a key role in creating Arnie’s book, Ogilvie set the stage for the evening’s reading. She shared several personal remembrances of Arnie and read this excerpt from her foreword in his book:

“If he had more time he would have written his fifth, sixth, seventh, eighth, and ninth collections, but the folks in charge up there gave him devices for only four. ‘Only four!’ I can hear him wagging a finger at me…”

Fan then introduced Paula Lyons, the love of Arnie‘s life, who shared these personal thoughts:

“…Arnie was so happy on this Island. I think the last ten years of his life were the happiest I’d ever seen him…he was so happy writing poetry. I’m grateful for Valerie (Sonnenthal) and Fan for coming up with this idea and selecting the poems that are in the book. I’m ready to hear Arnie’s words again, I hope you are too.”

Each reader then came forward and read one or two of Arnie’s poems. Most of the poems read were from his new book. However, several poets chose to read pieces from his prior books. Yet in each reading, the audience was entranced by the power of Arnie’s words. His mastery of wit and his ability to connect experiences so the reader feels the thread of connectivity amongst and between literary or social icons and historical events was ever present.

As a member of Cleaveland House Poets, I read the poem, “Life Deferred,” in which he riffs on the name Lorraine as a reference to the song “Sweet Lorraine,” to the playwright Lorraine Hansberry, and to the motel where the Rev. Dr. Martin Luther King Jr. was assassinated:

“Cages of Stages” is a brilliant representation of Arnie’s poetry. It is a delight to read and savor his play on words and thoughtful imagery in each piece. These poems are best enjoyed when read aloud. Fan suggested to the audience in her closing, “Don’t be afraid to just read out loud to yourself. It really is the best way to enjoy poetry.”

I think everyone would agree, the seance was a wonderful success. Arnie was brought back through the sound of his poems reverberating in the room.

Cleaveland House Poets sends thanks to MJ Bruder Munafo and the M.V. Playhouse team for opening their doors to host the evening. And we all send special thanks to Paula Lyons for her continued willingness to share Arnie with the rest of the world.

Jennifer Smith Turner, is a poet and novelist. She has three published books of poetry and is working on the sequel to her debut novel, “Child Bride.” 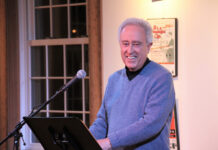 A poetry celebration in honor of Arnie Reisman 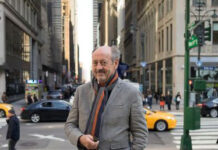 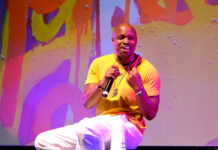