In these days when so many bird species are beleaguered by habitat loss, climate change, disease, environmental toxins, competition from invasive species, or other woes, it’s nice to be able to write occasionally about a species that’s actually expanding in numbers and range. All the more so if it’s a charismatic bird, colorful, and with a big personality. So let’s take a look at the red-bellied woodpecker.

First, though, don’t get your hopes up based on this bird’s name. Ornithologists have a perverse habit of naming birds after obscure traits, and the red belly is People’s Exhibit A. Adults generally do have red bellies — sort of. It’s a pale wash, rarely visible in the field, and said to be absent in the immature. Better, perhaps, would be to use this bird’s formal species name, carolinus, and call it the Carolina woodpecker: While its range extends far beyond the Carolinas, at least you can fairly say that the heart of this woodpecker’s range is in the Southeastern U.S.

Worse, one of the field marks that truly is visible often results in this bird being mistaken for a close relative. Equipped with a bold red crown and nape, male red-bellies often get reported by beginners as red-headed woodpeckers, a certifiable hotline bird in Massachusetts that, as an adult, has a completely red head. On female red-bellies, the red nape is present, but the crown is pale.

Naming snafus notwithstanding, the red-bellied woodpecker displays no shortage of distinctive marks. In addition to the partly red head, this species has strong black-and-white striping on its back and wings, and a buffy breast and belly. In flight, this species shows prominent white patches in its primaries, or outer flight feathers: Combined with the short tail and undulating, flap-and-glide flight typical of woodpeckers, these patches make an effective field mark.

This is a noisy species, often giving a rolling “querrrr” call or a coarse note that sounds like “chug.” I often hear the species before I see it, and given the distinctive quality of its notes, this is a bird that even beginners can readily learn to ID by sound.

Aboriginally, the red-bellied woodpecker may have been fairly common in New England. But given its fondness for deciduous woodland, this species fared poorly in the wake of European settlement, when vast tracts of forest were replaced with farmland and pasture. By the middle of the 19th century, the species was reportedly scarce in Massachusetts, a situation which prevailed for more than a hundred years.

But the gradual regrowth of woodland on abandoned farms eventually reversed the trend: By about 1990, the Massachusetts population really took off. I remember seeing my first Bay State red-belly around 1995, in a red maple swamp in Concord, by which time the species was already pretty well established in warmer parts of the state: the lower Connecticut River Valley and the Cape and Islands.

Today, the species has filled in nearly everywhere except the highest altitudes of Berkshire County. And this bird has continued its northward expansion all the way to the Maritime Provinces, where it will undoubtedly grow more common. On the Vineyard, I expect the red-bellied woodpecker is still outnumbered by the very common downy woodpecker. But given the loud calls and bold behavior of the former, the red-belly may be the woodpecker you’re most likely to notice on any given day.

Its success on the Vineyard is surely driven in part by its fondness for oaks: The plentiful acorns of the Vineyard’s dominant tree type are a reliable food source, and our middle-aged oak woodland seems to include a lot of nesting cavities that are the right size for this woodpecker. (Birds in the Southeast apparently show more fondness for pine woods than do New England individuals.) But this is also a species that benefits from human behavior: Red-bellies readily grow accustomed to human activity, and their rather un-woodpeckery fondness for sunflower seeds means they’re enthusiastic customers at most bird-feeding stations. The species is also notorious for drinking the juice of oranges (just as orioles are fond of doing), and will eat a variety of other fruits and berries. Especially in the breeding season, when high-protein food becomes critical for producing eggs or feeding growing offspring, the red-belly eats a wide range of insects and other arthropods.

Like other cavity-nesting birds, the red-bellied woodpecker suffers from competition for nest sites from the non-native house sparrow and European starling; I’ve seen both of these displace nesting red-bellies in my neighborhood, with the starling probably posing the biggest threat. But displaced red-bellies seem to have a knack for quickly finding another suitable nest hole. And their abundance in a wide range of habitats suggests that nest site competition is a threat they’re equipped to handle fairly well.

So although its common name may constitute false advertising, the red-bellied woodpecker is a well-established member of the Vineyard avifauna. Wherever you live, with a little attention and perhaps a sunflower seed bribe, you’re likely to be able to find one visiting your yard. 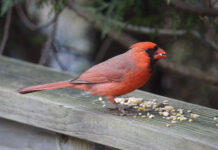 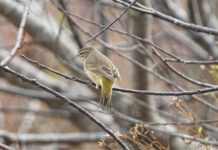 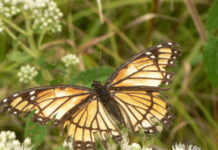