Windemere Nursing & Rehabilitation Center confirmed in a Wednesday, Jan. 25, press release that over half of its residents have tested positive for “the highly contagious new variant of COVID known as XBB.1.5.” Families of those who tested positive were notified by Windemere administration and medical director Hugh Harwood, M.D.

According to the release, this is the variant that represents “more than 40 percent of COVID cases.” The Virginia Commonwealth University Health website states that XBB. 1.5, an Omicron subvariant, “began its rise” in December and World Health Organization scientists warn the variant “may be more contagious than other COVID-19 variants, [but] there are still many unknowns about this emerging new illness.”

Windemere nursing home administrator Marie Zadeh reported in the release that 18 of the 30 current residents tested positive for the variant, which “spread quickly over a few days.” Patients who tested negative “have been isolated to help prevent further spread.” The release states that a total of eight staff — seven certified nursing assistants, and one registered nurse — also tested positive and are “isolated in their own place of residence.” Symptoms vary among those who tested positive, but the release said “no one is seriously ill to require hospitalization.”

Residents and staff who tested negative are undergoing daily testing, according to the release.

At this time, the cause of the spread is unknown. However, the release said the prevalence of the new variant “is very active in our communities.”

Windemere is following state and federal guidelines “with respect to visitors, precautions, and mandated infection control policies,” according to the release. Infection control measures listed in the release include limiting visitors, although this cannot be made mandatory under state law, wearing masks in crowded spaces, and good hand hygiene.

Martha’s Vineyard Hospital spokesperson Marissa Lefebvre said since so many people take at-home COVID tests on the Island, the prevalence of XBB. 1.5 is difficult to gauge.

“It’s hard to say for sure, we don’t have clear data on that,” she said.

Lefebvre said she will get back with more details on other questions The Times had about the situation. 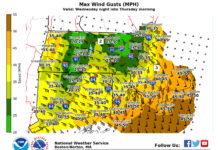