I think the drought is over, and we still see a few puddles around to prove it. This is really fall and sometimes it is hard to appreciate the trees while you are raking up the leaves. Just as we got some in a huge pile, the dog thought it made an excellent area to run a race through. Oh well — it was fun to watch and much more comical than a cartoon on TV.

The contract between Martha’s Vineyard towns and Comcast is expiring. MVTV and the towns want your input into what you would like to see in any new license agreement between the towns and Comcast. You can propose ideas and help explore the opportunity that the towns have to seek new resources and improvements in service from the cable company.

The Federated Church of Edgartown will hold its Annual Festival of Wreaths on Thursday, Dec. 2, from 6 to 9 pm, in the Parish House on South Summer Street.

Originally designed and hand-decorated, 75 natural wreaths for home and business will be on display in the Meetinghouse for a silent auction. Admission is $10, which includes hors d’oeuvres and two glasses of wine. Proceeds benefit the maintenance of the 1820 Sara Mayhew Parsonage. For more information, call the church office at 508-627-4421.

Volunteers are needed for the 14th annual PeaceCraft holiday benefit sale which opens the day after Thanksgiving, November 26 through December 24 at Pyewacket’s on Beach Road in Vineyard Haven. The sale of these crafts from self-help projects will benefit the poor though medical, educational, and food programs as well as offer a means of livelihood in the poorest areas of the world.

Our condolences to the family of Charlie Barr. Charlie was always so cheerful and his illness didn’t seem to slow him down. To Tina and all his family we extend our sympathies.

The Oak Bluffs School’s drama department will have their fall production of Annie this weekend. Shows begin at 7 pm on Friday and Saturday, Nov. 19 and 20, and at 2 pm on Sunday, Nov. 21. Tickets are $7 for adults and $5 for students. For families there is a $25 cap.

Bill and Maureen Anderson recently returned from a trip to Bill’s hometown of Grand Haven, Michigan. While there Bill was inducted into the Grand Haven Hall of Fame. The Hall of Fame includes residents who excelled, not just in sports but in any area. While a student at Grand Haven High School, Bill played on the football team which won every game in 1953 even when playing against teams from towns over 10 times larger than Grand Haven. In 1953 there were about 800 students in the school and now the school has expanded to more than 3,000 students. The residents are very proud and supportive of their town and schools. The team in 1953 was the best one the school has ever had. Maureen and Bill attended many events that weekend, including parties, tours of the expanded school and playing fields, and they met up with some friends and former students. At the induction ceremony, Bill and his teammates were presented with plaques commemorating the occasion, and the ceremony was filmed by the local TV station.

We send birthday smiles to Barbara Dugan and Yvonne Ponte on November 18 and Susan deBettencourt on November 21. Happy birthday and hugs and kisses to a special batman, Nathan Averill, on the 18th, from his Grammy and Grampy.

Next Thursday is Thanksgiving. Perhaps you can find an “act of random kindness” to do or someone will help you out in some way. Remember to check on your neighbors or the elderly who might need some help or companionship during the approaching holidays. 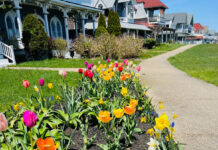 Oak Bluffs: A flower, a diamond, a sandwich, or a hug