She would wander in to the Texaco barefoot usually in a bathing suit. Occasionally she would be wearing a big floppy hat. Always she would be in need of a few Swedish Fish to make whatever adventure she was about to embark on just a little more palatable. The little girl with the long brown hair has grown into an amazing and successful young woman. That young woman, Hadley Wiggins, is now engaged. How exciting to hear that she and Daniele Marin have begun to plan their future together. Proud mother, Deborah Colitti, refers to Hadley’s fiancé as a “darling young man from Milan.” The couple lives in New York City, where they both work for Ralph Lauren. Hadley is in advertising and Daniele is a menswear designer. A 2012 wedding is in the works. Congratulations to the lucky couple.

The Grey Barn Blog 19 by Molly Glasgow is an entertaining account of her first glimpse into the world of piggy pregnancy. Fat Sally, as she is fondly referred to, will soon be ready to show her little piglets to the world. Stay tuned for an account of the birth.

I bumped into Coco Adams at the post office the other day and she mentioned Basil Welch was being cared for at the hospital. Pneumonia hit him pretty hard, but he was making progress and should be home soon.

I had a few moments to catch up with fellow columnist Molly Purves. While her car filled with fuel we had a nice chat about her son, Rodeo, who is a new student at the Chilmark Preschool. I later bumped into Hermine Hull while waiting in the checkout line with some milk at Cronig’s. Hermine and I had never officially met prior to this encounter, although I feel as if I somehow already knew her.

Cody Coutinho spent his spring break from Merrimack College on the sandy shores of Martha’s Vineyard. He looks great and is enjoying school and being a part of the rugby team.

Solon, Barrett, and dad Kevin Oliver, Keith and dad Jonathan Healy along with fellow Cub Scouts spent the night (literally) at the Mystic Aquarium. After arriving by school bus, enduring a quick orientation, and partaking in a snack, the aquarium adventure of a lifetime was game-on. The boys spent a half-hour each at various stations learning tons of cool aquatic information. Touch and learn, hands on with sea stars, lobsters, horseshoe crabs, and other aquatic life while learning interesting facts about each; Sea Turtle Class, where two teams compete in a turtle board game answering questions about sea turtles; Outdoor night tour, time outdoors with the beluga whales, sea lions, and seals which was, apparently, cold but fun; Fish Scavenger Hunt, find various fish throughout the aquarium using clues about each fish; Squid dissection — without a doubt this was the overall favorite activity of the boys. According to the Oliver men, they found three hearts, a giant liver, and tons of stinky slime.

Sarah Doyle and her daughter, Ava Stearns, have spent the better part of the winter in Wellington, Florida, for the Winter Equestrian Festival held at Palm Beach International Equestrian Center. Ava has had a spectacular show season. Dad Bret and brother Graham have visited their girls and Graham has particularly enjoyed his time at the local candy shop, the Sugar Shack.

Get well wishes go out to Abigail Howland who will be following the doctor’s orders of rest after her recent neck surgery. Lay low for now, Abs. Zoe will soon be dragging you by her leash down the Crossroad.

The library still has some great movie events going on. Tomorrow, Cary Grant is back on the big screen in “North by Northwest.” The free viewing, with popcorn and drinks, starts at 7 pm. On Wednesday the sixth, in honor of Tartan Day, the 1937 film “The Edge of the World” will be shown. It portrays a group of Shetland Island fishing families struggling to maintain a dying way of life.

Don’t forget, Tuesdays are pizza night at the Chilmark Church. Cheese and pepperoni are the choices put forth on the table, along with a mix of salads and cookies shared by the occasionally ambitious attendee. If you know you will join the faithful, give Julie Flanders a call at 508-645-3723. The light in the sky gives the kids an opportunity to kick a ball around or play a game of tag, so if you’re thinking ahead put those feet in sneakers. 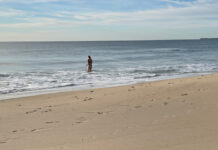 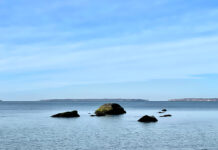 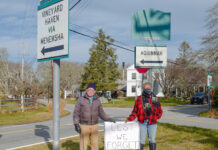