The sun has been shining and it appears to have inspired many people to start to spruce up their yards and houses. We seem to hibernate during the cold winters, somewhat like bears, and don’t venture out much until we feel the warmth.

It has also brought out some of the hidden inhabitants of my house, mainly all sorts and colors of spiders. The latest version are those pale, anemic looking spiders that look as if they have spent the winter inside playing video games and not getting any sunshine. No matter what their appearance, they really are my least favorite “wildlife,” so out the door they go. As March came in like a lion, at the last minute, let’s see if she goes out like a lamb.

It is so nice to start the column off with happy news. The Ponte family has received their miracle. This past Saturday, March 26, they received the call they had long been hoping for. As they were on the steamship heading back to the Island after watching their son Hunter’s hockey game in Barnstable, they received a call from Mass. General Hospital telling them that they had a kidney and pancreas for Kenny.

He had surgery late that night and is recovering beautifully. He will be there for a week or so, then come home to recover. His family is so excited and grateful, especially to the family of the deceased donor, and they wish that they could tell them in person how much this means to all of them.

Hunter blew out his birthday candles the night before on Friday and his wish was for his daddy to get better. Kenny will now be diabetes free for the first-time in 36 years. Now the entire family — Kenny, Erica, Hunter, Shelby, and Jake — send blessings to everyone for their kind thoughts and prayers.

In addition to its regular course schedule, Ace MV has several special events planned for the near future, including Art of Cake Decorating on April 7 at MVRHS, and Introduction to General Relativity, also at MVRHS, on April 9 from 1 to 3 pm. For Info and registration for these and many other programs, visit www.acemv.org.

The Oak Bluffs Library presents Coco the Clown & Voice Movement Therapy on April 9 from 10:30 to noon. Join Coco the Clown for a short film and interactive playtime, which benefits children of all ages — and it’s free.

The Martha’s Vineyard Women’s Network announces that a grant of $2,500 will be awarded to a local small business person based on Martha’s Vineyard looking to improve, grow, or start a new business. Application and instructions can be found at mvwomensnetwork.org.

On Tuesday, April 5, from 6:30 to 8 pm at MVRHS, MVWN presents a program titled: The Power of Email Marketing and Getting Started with Constant Contact. Register on line at www.mvwomensnetwork.org.

Marsha Winsryg wants you to know that The Shephard Fine Art Space in Oak Bluffs (formerly The Nye Gallery) will feature The Persephone event on Saturday, April 2.

We send birthday smiles to Robin Meader, Betty Rose, and Tyson Araujo on April 1, Richard D. Combra the next day, Heather Holt on April 4, Sandy Ferreira on April 6, David Tchorz and David Hill on the 7th, and to Ben Hall III, my birthday twin, on April 8.

Special birthday smiles to Aidan Christensen who will be turning 3 years old on April 6. His parents say he is absolutely the best thing that has ever happened to them.Enjoy your week.Peace. 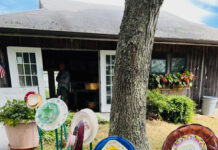