I don’t know of a food more versatile than the French fry.

And I don’t know a single person who doesn’t enjoy one from time to time. It can be a completely different dish depending on what you pour on them or dip them in. French fries are a staple in their little red box at McDonald’s and they are sometimes served alongside a steak, under the French name, pommes frites, at French Laundry, one of the most exclusive (and expensive) restaurants in America.

At pubs, bistros, fast food joints, and white-linen restaurants across the country and beyond, French fries have a place on the menu.

But where did they come from? Despite the name, the origin of French fries is not as cut and dried as you might think. Incas in northern Chile are believed to have cultivated wild potatoes as early as 750 B.C. But they were likely not chopped up, deep-fried, and dipped in ketchup for another 2,000 years.

Despite the hopeful claims of some, the fried potato favorite was most likely not created in Paris, Texas. The most probable birthplace of the snack-that-no-one-can-resist is either France or Belgium.

Some reports suggest that it was American soldiers during the first World War, who after eating the thinly sliced, fried potatoes in Belgium dubbed them “French fries” because French was the official language of the Belgian National Army at the time.

Other reports suggest that French fries are the handiwork of an anonymous Parisian chef in the mid 1840’s. The salty, crispy delights, known as pommes frites there, were immediately popular and sold by street vendors all over the city.

As for coming to America, we might have former President Thomas Jefferson to thank for that. President Jefferson reportedly requested, “potatoes served in the French manner” at a White House dinner in 1802.

And now, 220 years later, French fries are a cuisine all their own, with adaptations like Poutine, curry fries, cheese fries, chili fries, truffle fries, even chowder fries. Last week I went in search of some of these French fried concoctions on the Island, and had some delicious encounters along the way.

Ken ‘N Beck does a classic Quebec-style Poutine, medium-cut fries that are soft inside but crispy outside, topped with cheese curds and a brown gravy ($11). This dish will disappear quickly when surrounded by hungry friends.

Atria was known for their truffle fries before they were on the menu. Along with their burger, it was the Vineyard’s version of a “secret menu” like the west coast’s In-n-Out burger. The burger and fries have come a long way, with a menu of their very own now. The truffle fries, like their regular fries, are long, thin, and golden, but with shaved Parmesan and a touch of truffle oil. Add $2.50 if you opt for these with your burger instead of the regular fries or order a side of them to share with the table ($10). I had them recently with the Atria Classic burger, which comes with a side of Béarnaise sauce. I highly recommend reserving some of the rich buttery sauce to dip your fries in.

Curry fries or curry chips are popular in English pubs and The Newes from America right here in Edgartown is no exception. Medium cut fries are salted and sprinkled with curry powder topped with a curry-infused gravy, $7.50.

The Wharf serves what might be called New England Poutine with their chowder fries. I encountered a bit of resistance from friends when I suggested trying these, but really they are quite good, everyone agreed. House chowder sits in a shallow dish topped with French fries, cheddar, and jack cheeses. The cheese melts as you eat and the fries soak up the chowder ($9). The Wharf also serves chili cheese fries, which, as you can imagine, are the same thing but swap chili for chowder, also $9.

The Martha’s Vineyard Chowder Company offers a Pot of Fries ($5), which share a likeness (in a good way) to McDonald’s; skinny and golden, crisp and salty.

The Black Dog serves the slightly sweeter and more nutrient rich sweet potato fries. The bright orange hue is indicative of vitamins A, B and C, which are packed in the sweet tuber. Add them to a sandwich for $3.19 or get a basket for $6.38.

Offshore Ale Company does a rendition of truffle fries as well, shaken with Parmesan and sea salt ($7.95). This past Monday officially marked the off-season at Offshore when they started their two-for-one Monday nights so bring some friends, even-numbered to maximize the deal, and take advantage of a winter staple.

At home you can experiment with other “French fried” veggies such as eggplant, portabella, zucchini, or asparagus. Or play with different dipping sauces and accoutrements like Sriracha mayo or smoked paprika aioli. In Belgium, some French fry aficionados crack a raw egg on just-out-of-the-fryer fries. Most of the egg cooks thanks to the hot fries, but the yolk tends to stay runny, for dipping. Always a crowd pleaser, fries are fun and easy to get creative with and a new sauce can take them from guilty pleasure to haute cuisine.

Next week I’ll be writing about places you can order Thanksgiving meals from, as well as restaurants that will be open for the holiday. Please email me if you have suggestions. 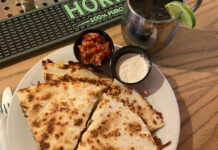